ABC Wednesday - F is for French 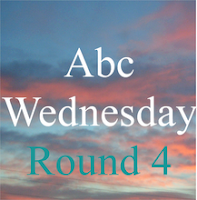 I can't believe a whole week has gone by and I haven't had time to write anything! But I simply cannot let ABC Wednesday go by without participating.
I thought about telling you all how I had come down with the flu, including a fever. But frankly, I'm so sick of being sick, I just had to come up with something else.
So I've decided to tell you how I became a French teacher. First of all, I wanted to be a teacher ever since I began school at age 6. I fell in love with my teacher and promptly came home and announced to the family that I would be a teacher when I grew up. My future plans never changed, except for the fact that when I started to learn French in Grade 7, I thought perhaps I could be a French teacher.

I'll never forget my first lesson - the teacher, a first-year teacher whom I thought was SO old and was probably about 21, flounced into the classroom (wearing - I will never forget - a belted shirt dress with short sleeves, a collar, and full skirt - anyone else remember that style?) She stood in front of the students and said:
J'entre dans la salle de classe.
Je regarde autour de moi.
Je dis bonjour au professeur.
Je prends ma place.
Well, of course, everyone just looked at each other as if the teacher was fou (crazy). No one understood a word she said. So she just went outside the classroom again, closed the door, and after a moment or two, she repeated her performance. I think it was after the third or fourth performance that a few kids started to get the idea. And we moved on.
In my last year of high school, I had a fantastic French teacher. However, she did intimidate me a bit. She was very strict and formal, insisting on absolutely perfect behaviour, attitude, and performance. However, I still loved the sound of the language and worked hard to get good grades. Towards the end of the year, each student had to give a speech in French to the whole class and after the speech, the teacher would ask questions - yes, in French - and we had to be able to answer in French. I prepared very carefully and I'll never forget that just after Madame asked me her question and I was trying to come up with the answer, the bell rang to end the class. Never have I ever been so relieved - saved by the bell - literally!
Off I went at age 17 to the University of BC and studied for five years to be a French teacher. Along the way, I also studied four years of Spanish and a year of Italian. I can't say I'm fluent, but I must say I love the sounds of these languages and when I was in France, Italy, and Mexico (still have to make it to Spain) I was in my glory and was picking things up very quickly.
Now after teaching for many many moons and being retired, I still enjoy tutoring kids - usually boys - in French as a second language. (I think it's something about the right brain versus left brain thing with boys and second languages.) As it is, I must run since today's student will be here in about five minutes.
Thanks to Denise Nesbitt for hosting ABC Wednesdays. Click here to view participants' posts or to find out how to join in.
Posted by Leslie: at Tuesday, February 24, 2009

A great post with all the F's! Thanks for your words and photos.

Apart from the fact that you and I get along so well, you and my Mum would have been soulmates.

Stay well. Look after yourself.

Gee david, it would have been an honour to meet your Mum. She and my mother both suffered from that wicked Alzheimers, so we'd have that in common, too, as you & I do.

Great post, photoes and worlds for the abc. Have a fun day:)

Nice post for F, i do hope you get to feeling better.

How wonderful Leslie, that you are a French teacher. I tried to learn French as my third language. I studied hard and now I can read and write it with the help of a dictionary. I can have a simple conversation and understand it if people speak slowly and don't speak a dialect. English is my second language and I almost understand everything apart from some standard expressions. I became an English teacher.

I hated French in high school and was very bad at it. I only learned when I lived in Italy and nobody spoke Dutch or English, since most people were either Italian (which I didn't speak at all) or French (since it was a little known French company called Club Med). I can speak it now, but wouldn't like to converse with a proper teacher, since my grammar doesn't exist at all...

My latest quest is too learn french as one day we hope to live and work in the South of France. Fabulous post for me.

Wow that is really amazing...I SHOULD of studied harder at school.

I would love to learn another language, but if you don't get to use it everyday, it is hard.

Get well soon, can't believe you got the flu bug :-(

Oooh, you teach French! I enjoyed learning French at school, but was never any good at the answering questions thing. I flunked that and it took my entire grades down with it. LOL!

I love the sound of French - indeed, I love France. Lovely photo and narrative.

I so wish I could speak Spanish! My grandchildren speak it at home and their mother speaks it when she doesn't want me to know they are getting in trouble!! My granddaughter told me I would never be able to speak Spanish because I can't roll my r's.

i would love to visit paris... it sounds so romantic :-)

Very clever with all the F's! Very interesting, too. Love from Sicily x

Beautiful pics of the Tower!

Hope your flu is feeling better!

You are quite rigth in stressing the importance of the quality of the teacher. I had three years of French in school and did fairly well, bur that was despite the teacher, nopt because of her. And that went for the whole class.

Hope you are well on the road to recovery, Leslie

I remember sitting in French classes, waiting for my turn to be questioned and praying the bell would ring!

I learned the very same thing in my first French classes as well.

Phinnaeus is in French immersion, and he's very fluent in French. It's a hoot!

I hope you're feeling Fine soon.

I haven't hear from you for many days. I hope you are OK.

I hope you are better from the flu now!

Fantastic F - and the Eiffel Tower is definitely a sight to behold!

In your "F Is for French" blog, you quoted your French teacher as entering the room and speaking the four sentences you provide here. You left out the third line of five: "Je vois les élèves et le professeur." which comes before "Je dit "bonjour." au professeur." How do I remember this from 1961 when I learned these lines? One of the two or three authors of this standard mid-century American French high school textbook, Modern French, was a teacher at my old high school, Brookline High School , n Brookline, Massachusetts.

I remember that same French textbook in the 7th grade. It had a red cover. Any idea what it was called? The authors? I'd like to find it and add it to my library.