M is for Magnolia 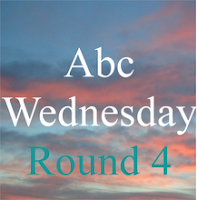 Every Spring since I've lived here, I've admired the magnolia tree across the street. And every year I tell myself to get over there and take some photos of it. Well, I finally did today since I remembered that it's "M" day for ABC Wednesday (hosted by Denise Nesbitt over at mrsnesbittsplace). I thought it might be interesting to look up "magnolia" on Wikipedia and I can't believe how much I learned about a flower/tree that seems so ordinary.

Magnolia is an ancient genus. Having evolved before bees appeared, the flowers developed to encourage pollination by beetles. As a result, the carpels of Magnolia flowers are tough, to avoid damage by eating and crawling beetles. Fossilised specimens of M. acuminata have been found dating to 20 million years ago, and of plants identifiably belonging to the Magnoliaceae dating to 95 million years ago. Another primitive aspect of Magnolias is their lack of distinct sepals or petals. . .
The bark from M. officinalis has long been used in traditional Chinese medicine, where it is known as hou po (厚朴). In Japan, kōboku, M. obovata has been used in a similar manner. The aromatic bark contains magnolol and honokiol, two polyphenolic compounds that have demonstrated anti-anxiety and anti-angiogenic properties. Magnolia bark also has been shown to reduce allergic and asthmatic reactions.
Magnolia has attracted the interest of the dental research community because magnolia bark extract inhibits many of the bacteria responsible for caries and periodontal disease. In addition, the constituent magnolol interferes with the action of glucosyltransferase, an enzyme needed for the formation of bacterial plaque. (from Wikipedia)
Since the bark of the magnolia tree is used as an alternative for anxiety disorders, reduces allergies and asthma attacks, and keeps your teeth free from bacterial plaque I just might go and ask if I might harvest some of my neighbour's bark. Imagine the money I'd save on drugs! lol
Or plant my own magnolia tree.
I'm sure enjoying these sunny days but wish it'd warm up just a wee bit more. Enjoy the photos and if you wish, click to enlarge. 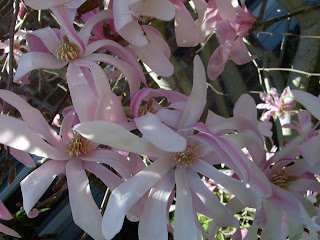 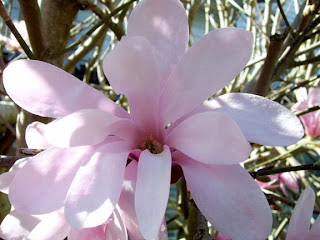 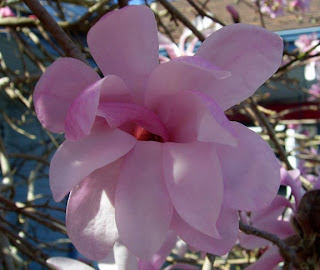 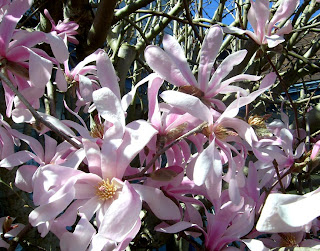 Oh, your photos are gorgeous! What great information about the magnolias! I need to go chew on some bark! Great post! Thanks, for stopping by my blog and for your comment! It's lots of fun, isn't it?

Beautiful photos, and interesting information on the tree. I had no idea they were pollinated by beetles because they're an ancient species. Cool. And the medical applications are fascinating.

Wow. They are so utterly beautiful! I just love them so much! What lovely Magnolia blossoms. I love that word: Magnolia. It sounds so delightful to me!

These magnolias certainly give hope of Spring. Your summer pictures will no doubt brighten up my Winter!

How beautiful Leslie. Now I have learned some new things too. I had no idea it had medicinal value. I like Sylvia's reaction about needing to go chew some bark..

I love magnolias, and your photos are beautiful. I enjoyed all the info also. Great M.

These are gorgeous photos! Let me know if you decide to branch out into the pharm business! I'll order. Good post!

And I just thought magnolias were pretty to look at! Magnificent photos and a very interesting post. We had a lovely magnolia tree at our previous house; I miss seeing it come into bloom every spring.

Beautiful! Those magnolias are very different that ours here in the south! That's interesting.

Lovely post Leslie! And interesting to know about the medicinal qualities. Yes do go and plant your own magnolia tree! You won't ever need the doctor again!
Thanks for your visit!

A beautiful images of a sweet smelling bloom. Beetle who'd a thought.

Absolutely lovely photos!
I love magnolias too and wish that they would bloom for longer. Unfortunately, I haven't any room for one in my pocket hanky sized garden.

A beautiful tree that I would have loved to have around. You have shown it off well.

I really like the way pink magnolia flowers always stand out so much against the branches because of the lack of leaves.

The petals look so lovely in your photos.

We have a magnolia tree in our garden but the flowers are different from your photos. If i catch one i'll take a shot and i'll post it. The smell of the flowers is amazing.

I can smell the magnolias all the way out here in Iowa!

I recall these beautiful trees when I took a trip to the deep South one time. Their fragence is overpowering and wonderful.

What a lovely soft pink! It's only nature that can really make that pink perfect...

I've always loved magnolias, but I never realised how far back they could be traced! It's much too windy and salty for them here :(

I have a little magnolia in a pot, called 'Susan' - it's a variety with deep fuchsia pink flowers, that pale as they open.

I had no idea it was such an ancient tree! Interesting about the beetles. :)

And your pictures are beautiful. I didn't know the bark was good for asthma.