V is for VANUATU and VANCOUVER

I cannot believe we're almost at the end of Round 4 of ABC Wednesday. My theme this time is "Destinations," in case you haven't noticed, and I've been saving Vanuatu for some time now. So far, I've used destinations that I have actually been to, but I must admit I'd never even heard of Vanuatu until a few months ago.

Here is the story. My friend Cathy was on disability for several months while she underwent some medical treatments. She regularly received her cheques from our provider in Michigan, USA. One month when her cheque didn't arrive, she phoned long distance to have a new cheque made up. Many months later, what should arrive in her mailbox but the missing cheque. It had been sent to none other than Vanuatu, a group of islands off the northwest coast of Australia! I googled the name and saw that it's a gorgeous tropical place full of white, sandy beaches and palm trees - a veritable paradise for honeymooners and tourists. I'm sure Cathy's mail had a wonderful voyage, but she would have preferred it to arrive in a more timely manner. Here's a copy of the enVelope. 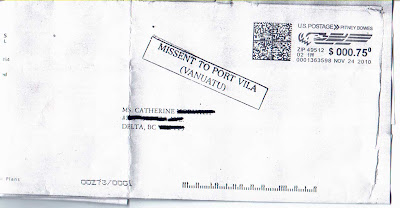 Now I must use VANCOUVER this week because it is my home town, a place where I was born and where I've live most of my life. I'm sure you all remember only a little over a year go when we were hosts for the Olympics and the town went wild with excitement when both the Men's and Women's Canadian hockey teams won GOLD medals! Well, let me tell you about the excitement raging in the streets, restaurants, bars, homes, and - well, EVERYWHERE right now as the VANCOUVER CANUCKS hockey team vie for the STANLEY CUP. If they win, they will bring the cup back to Canada, where it originated and where it belongs!

We are vieing against the Boston Bruins, who last won the cup in 1972, but since the Canucks entered the league in 1970, they have never won it. You can read about it here on Wikipedia. Tonight is Game #6 and the Canucks are leading 3 games to 2. If they win tonight in Boston, they win the cup and will fly home victorious! If not, the final game will be on Wednesday here in Vancouver. Both teams desperately want the cup and both teams have been playing hard, forcing the two goalies to stay alert to their utmost ability. You can be sure that whichever team wins, there will be victory parades and victory parties while the other team will go home to drown their sorrows.

BELIEVE IN BLUE!
GO CANUCKS!
Update: They're gonna win at home on Wednesday!
Posted by Leslie: at Monday, June 13, 2011

Love the Vanuatu story. You should go there to check the place out!

GO CANUCKS!!!!
I'm thinking Vancouver is less likely to win IN Boston, given their history there in this series, and wouldn't it be wonderful to win at home, with 100,000 people downtown again?
I imagined your friend's envelope would have had Vancouver on it in order to be sent by mistake to Vanuatu, but "Delta"????? Strange mistake. Great story.
— K

On the other hand, Vanuatu sounds lovely.

I would so like to visit Vanuatu, heck - anywhere in Canada would do!! How funny about your friends mis-directed packet - there was a story on the news here a little while back of a letter delivered 30 YEARS after it was posted!!

I had never heard of Vanuatu before the television show Survivor. They did one of their seasons there. Its beautiful and wild and very earthquake prone.
Even though I'm in the US I truly hope the Stanley Cup returns to where it belongs. Sorry Boston!

Great story about Vanuatu which was not anywhere near my radar screen, but something to definitely keep in mind. We hope, however, to go to Vancouver this summer (first time)!

Not a great hockey fan, but I am cheering for the Canucks!!!
Sudden death on Wednesday now.

I do love the Vanuatu story and I know so many of you are looking forward to tonights game!! I'm close enough to Canada to cheer the CANUCKS!! Enjoy your week, Leslie!

ROG took the words right out of my mouth!!
Jane x

Go Canucks Go!! They have to win Wednesday! Someone said it is a tale of 2 cities and the series has sure shaped up that way!
Great story about Vanuatu!

Wasn't Vanuatu the first place to enter the year 2000 because of the International Date Line location? I've definitely heard of it and knew where it was. My husband regularly visits the Pacific Islands, in fact he is there now, but mostly the North Pacific and I know he hasn't been to Vanuatu.

And Canada Post has the nerve to go out on strike. At least it turned up eventually.
Game 7 - good luck.

What a pity the envelope didn't acquire one of the pretty Vanuatu postage stamps.
Come on you blues.

What a great V-post, Leslie! Tonight's the night and I am cheering for the Canucks! Could that be seen as treasonour :)?
HelenMac
ABC Wednesday Team

oooo! Can't wait to go look at the link through for Vanuatu. I've never heard of it, but it does sound wonderful!
Go CANUCKS!

My friend went to live in Vanuatu, and they started the bungy jumping.

Interesting - Vanuatu looks like a delightful vacay spot! When will you visit there and fill us in with the details? Go Canucks!

What a funny story about Vanuatu, and I'm another that has never heard of the place! Sounds great, though. :-)

That is a long way to be misdelivered!

Late bloghopping for ABC, please drop by when you can to see my V Entry thanks!

I had a Christmas card come to me in February with the stamp "Missent to Bermuda". Strange!!

hello~ Leslie.
I have a plan to visit Ladner this winter. During googling, hopping by your blog and I am attracted by your post.

How about write more about Ladner?

Hello! Leslie.
I have a plan to visit Ladner this year with my son.
During googling, hopping by your blog,I aam attracted your poem.