A is for ACORNS 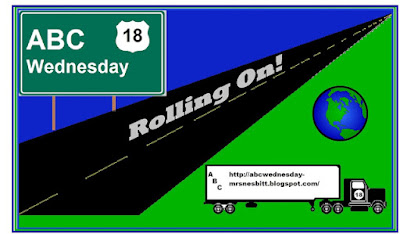 Welcome to the first week of Round 18 of ABC Wednesday and how do you like our new banner?  I decided to let my grandson Noah choose my word this week by asking him "A is for what?"  The first 2 answers were unprintable (he just turned 12) but the third one struck gold.  So my word this week is ACORNS.  Acorns come from oak trees, which are abundant in southern Canada.  These are unripe acorns below. 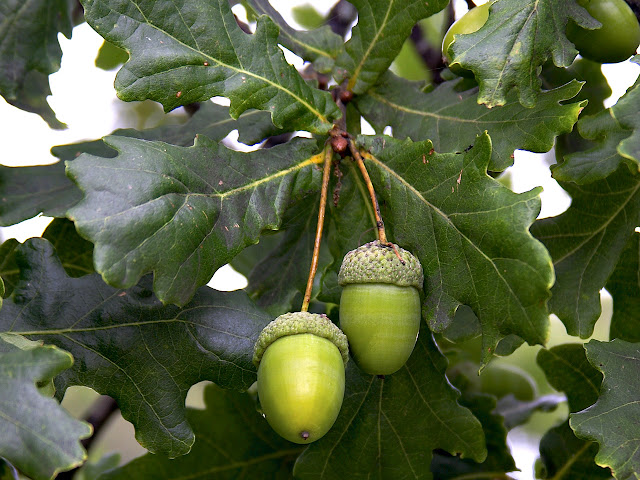 I'm sure everyone knows acorns are nuts, but they don't seem to cause allergies in people.  They are hard, dry pods sort of like chestnuts and hazelnuts.  And did you know that one Canadian province, Prince Edward Island, has three oak trees on its flag? 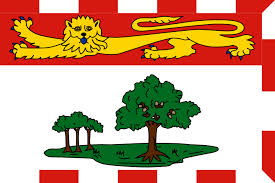 Did you know that part of the male anatomy was named after the acorn?  It's the "glans" which is Latin for acorn.  In the 17th century, apparently the English thought it resembled the part "down there" and no, I won't be including a picture!

Not only squirrels, but also deer eat acorns in the fall.  Mice, woodpeckers, blue jays and ducks like to snack on them too. Even bears!  Oak trees depend on these animals to carry the nuts to other locations and bury them so that a new tree will grow in that spot. 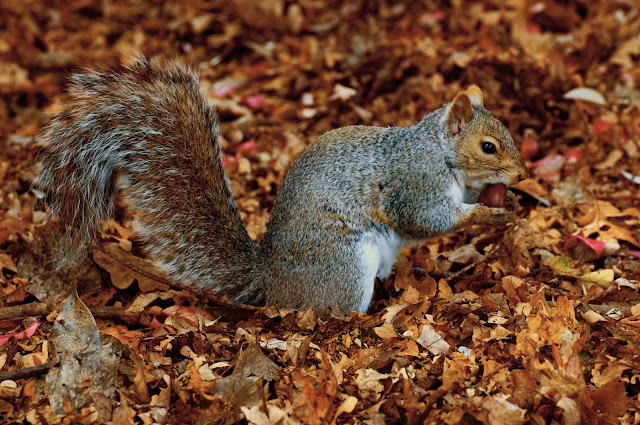 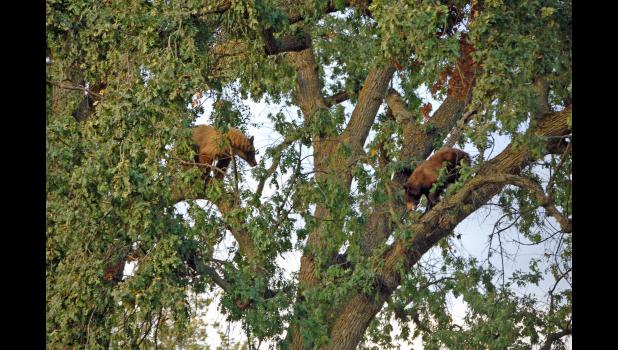 Acorns are packed with nutrients so it's not surprising that people from different cultures have been eating them for thousands of years.  Some acorns are 18% fat, 6% protein and 68% carbohydrate, equivalent to modern corn and wheat. They are also great sources of vitamin A and C.   You have to be careful about the tannins, though.  Tannin is a bitter chemical that we humans use to tan leather.  Acorns are not really that good for you raw because our sensitive intestines can't get the nutrients out of them.
Great thanks to the adorable Denise Nesbitt, creator of ABC Wednesday, and to the admirable Roger, our administrator.  There is also a team of affable regulars who take turns visiting all the contributors to ABCW, so ardent thanks go to them as well.  If you'd like to be part of the visiting team, please contact Roger who will put you on the agenda.  We are still accumulating new people to ABC Wednesday, which is incredibly awesome!  See you all next week for the letter B.
Posted by Leslie: at Sunday, January 10, 2016

What a lovely post.... and indeed, you are so right in every sentence ofcourse.

See u next week

I did not realize that acorns are edible for humans and that their name came from our anatomy- a delightful way of doling out the information. There is an oak tree close to my deck- so the squirrels like to eat there and leave their 'trash'. And, of course tons of leaves drop there in the fall.
Of course, I'm now curious what grandson's two words were.

Loved your pictures of the wildlife enjoying the acorns, - have never seen bears in that locality before!

That's what I love about ABC Wednesday.
I learn so many things.
Fascinating information on acorns.
Bears in the trees eating acorns...amazing.

Acorns. are a bsolutely part of our culture too. Children collect them in autumn.

Creative post for A and fantastic shots ~ are those foxes in the trees?

I like this choice for the letter A and learning about the humble acorn. It really is an interesting looking plant.

Those are beautiful plump Acorns, much rounder than the type we have here.
Acorns are a part of California culture as well. The Live Oak trees are protected and their acorns were once a staple food of the early native people of Southern California. Many, many years ago when I was a fourth grade student as part of our California History study our class gathered, peeled and then soaked acorns to be mashed and we all ate a bite or two of the resulting mush...made us all very glad it was no longer a human food source!

I learned a thing or two about acorns, apart from the squirrels. I have a few holes in my lawn where they have buried then dug up their acorns, so I know all about those blighters!

Those acorns are not to be seen in our area.Great post.

Lovely acorns, and squirrel too!

Fun to read about your insights into acorns and see your photos connect! I didn't know acorns are a great source of vitamins A and C.

I did not know that people ate acorns. Love the acorn photo and the squirrel photo, too!

Truth be told, I have never - until now - noticed the acorns on the P.E.I. flag!

I have it on my list to make acorn meal at least once. I like that photo of the bears in the tree. Didn't know they were such good tree climbers.
The View from the Top of the Ladder

Love those bears taking an amble in the tree, I've never seen that before. I vaguely remember part of a wild show showing how our ancient ancestors would have cooked nuts that were not good raw, there was some grinding involved.

Love your pictures of the squirrel and the bears. Thanks for sharing.

I think of Ayla and the bear clan, where they ground up some nuts to eat. In my head, it was acorn.

Great pics,, and I wonder what the first two words were myself (my son just turned 13...!)