I hope you enjoy these photos of my younger daughter Jaclyn. Of course, she wanted to follow in her big sister's steps in figure skating, so she began even earlier than Jamie had. However, by the time she was about 7, she had far more interests and switched from ballet and figure skating to soccer! Jaclyn has developed many varied interests throughout her life so far. She is an accomplished poet and I've been trying to encourage her to get her poetry published. She also has a beautiful singing voice and has sung in choirs, theatre, church, karaoke, and even considered trying out for Canadian Idol (work stopped her, though). She loves all animals, is a great baker, has 3 tattoos and ear piercings (each) so far, and has a diploma in makeup technology (she can even do FX work). She is multi-talented, highly intelligent, and has a very dry wit. I love her dearly! 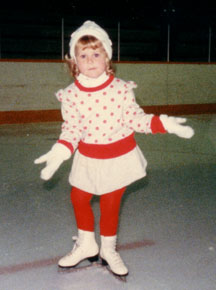 At age 2 1/2, Jaclyn tried very hard to get the pose just right! And yes, I made her little outfit - I can remember sitting at the sewing machine trying to get those little shoulder ruffles just right! 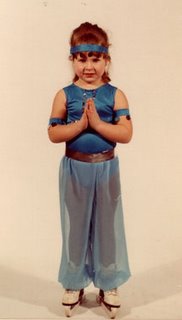 At age 3 1/2, Jaclyn stole the show in the Arabian Nights portion of the ice show by skating away from the other little ones to skate with the two adult "stars." She got quite the round of applause! 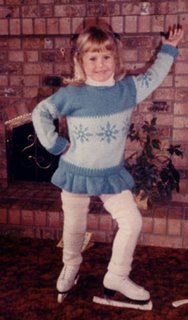 By age 4, Jaclyn had the "pose" down just right. I think my mother may have knit this little wooly skating outfit for her. She looks like she's enjoying the moment, doesn't she? 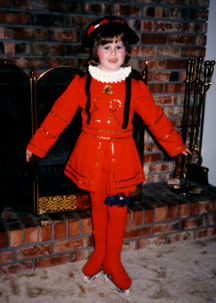 Here she is all decked out in her "Changing of the Guard" costume. And yes, I made this costume, too! Even the hat and the collar! I can remember fussing with this costume and cursing under my breath that the organizers had gone too far that time! But what a picture all those children made at the show! 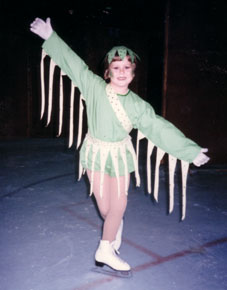 At age 7, Jaclyn turned into seaweed for the annual ice show called "Under the Sea." She looked absolutely adorable in the costume complete with green cheeks! However, that Halloween, she was mad that I made her wear it because it still fit and I didn't want to make another costume! I was beginning to have had it with all the fancy sewing. 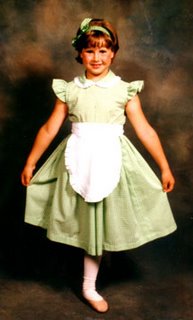 Here she is in her official dance portrait the year she was 7. She was in a number called "Mistress Mary, Quite Contrary, How Does Your Garden Grow?" I can't believe how much time I spent driving the girls to ballet and skating during those years! But it was all worth it to look back now. 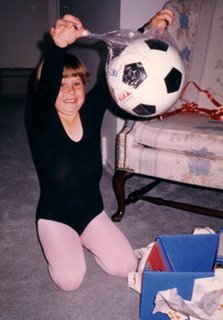 As I mentioned above, Jaclyn started getting other interests. She knew all about her Grampa being a soccer star in his youth and decided to take up the sport. I think this photo is quite amusing as she had just come home from ballet practise and was still in her outfit to open her birthday present - a soccer ball
Posted by Leslie: at Sunday, September 17, 2006

you are such an awesome lady leslie. thanx for letting us see another side of you--loving mom and gifted sewer. again, i know both of your daughters love and appreciate you for not only all that you did while they were growing up, but even now that they're grown. excellent tribute to your youngest daughter as well. beautiful.

Thx Sylvia, I do love both my daughters more than they will ever understand. Each is different with her own personality, talents, and gifts. And I know that they would do anything for me if I needed them. Now that they're grown up, they also understand what I did for them and why after their dear Daddy died.

Hi Leslie...
These pictures are wonderful! You are a really good seamstress! I never could sew. I made a dress once in a sewing class and it was horrible! I wish I had a picture of it to post...funny!
Your daughters were adorable in their costumes and what a great mom you were to support them.
Thanks for sharing your memories with all of us :)

i like your new pic. some of us would like to do voice/audio on our blogs. how do we go about it? i think you and brenda/clickgirl did it once.

Yes, I did it a year ago, but I forget the phone number you have to call. It does cost $, you know. I'll see if I can find the number and let you know.