U is for ULTIMATE 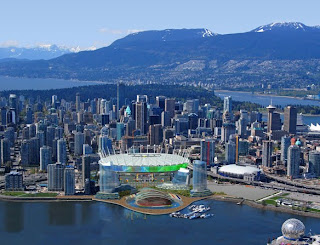 As some of you already know, my fiancé has been hired by the security company that's dealing with the 2010 Winter Olympics here in Vancouver. Yesterday was his first day at "Boot Camp" and he received his deployment. They're using military terms since this is just like a military operation, security-wise.

It's almost unbelievable that he got the ULTIMATE venue!!! Could there be a more beautiful setting? (click on photo to enlarge) He will be in charge of BC Place Stadium where the Opening and Closing Ceremonies will be held PLUS where the hockey games will be played. I am so proud of him and so excited that he'll be right in the thick of all that excitement. Naturally, he's a bit overwhelmed and anxious about doing a good job, but I have great faith in his ability to perform under pressure. With luck, our weather will be cold and crisp with lots of sunshine both for the tourists and for all the workers. My sweetie won't have to worry about carrying an umbrella around with him to protect his new ultra uniform (I'll take a photo of him in it when he gets it).
And the upside of all this is that if he does a good job here, there's every likelihood that they'll utilize him in London for the 2012 Summer Olympics! And I am utterly uplifted by this possibility. If he does get on for 2012, I'll also apply with this international company - as a trainer. We'd both get paid room and board for the duration of our employment plus we'd extend our stay to see more of the country and visit our friends there.
ABC Wednesday is the brainchild of Mrs. Nesbitt and to see other contributions to this fun meme, simply click here.
Oh, and a side note - while looking in the dictionary to find words beginning with the letter "U" I came upon a new word that I really like: uxorious - means foolishly or excessively fond of one's wife.
Posted by Leslie: at Tuesday, December 08, 2009

You've got some exciting "U" times to look forward to! And that can indeed be the ultimate fun!

What a marvellous setting for the winter games ! Look forward to seeing more of it next year.

Wow Leslie such could times coming round to "U" ..I am sure that he will be amazing at this job..well done. The venue looks amazing, lets hope the weather goes with it.

Not sure what the UK will be like for our event, nor the weather but it is along way off yet..ha ha

Hey has my : uxorious husband been describing me to you! lol! ie did he indicate he was foolishly or excessively fond of his wife.

Indeed it is an ultimate venue. Wish we could visit that place soon. Thanks for sharing!

Wow. That is exciting news. And you have such a great attitude about everything! I hope it all works out for you! London 2012~ : )

Congrats to your husband. What an honor. What a great use of "U"!

Congratulations to your fiance, - sure he will do an excellent job. Such alot of excitement here in B.C. about the Olympics, even in the Interior.

U have some fUn times coming Up! Good post!

Wow, what fun the two of you will have! Glad things are going so well!

LOL-your uxorious goes with my "ux" and uxor" words! Isn't that a fascinating word?!
Congrats to your fiance! What an honor and how incredibly exciting! Does that mean you'll get in to see some of this too?

Great "U" entries! And, yes, he got the "ultimate" venue! Wow! Congratulations!

The waterfront setting looks amazing. Did I read that this will be the first indoor opening of the games. Not long now to go now.

Unbelievable! A unique opportunity to experience the universal games.

Outstanding Leslie. What an exciting opportunity. Our family went to the Montreal Olympics back in 1976. We saw the closing ceromonies. It was a fabulous experience.

Oh wow!. So many lovely things have happened for you and Lorne this year. Long may it continue.

OMG, how wonderful Leslie, little wonder you are thrilled and as proud as Punch of your lovely man. Be sure to give me a shout if you do make it over to London, now wouldn't that be something? (Big, wide grin.)

Congratulations to hubby...that will be exciting and challenging...funny my brother in law is involved with the security at the Olympics as well...but he is engrossed with the air security...and yes he is ex-military.....

I like how you got to tell such a great story and incorporated the "U" so well.....cheers...

Great setting for the Winter Games, and sounds quite interesting to be involved in security planning.
Hope you get hired for the London gig. That would be a wonderful trip.