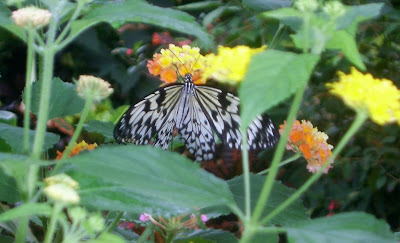 I know that some of you have been wondering how my date in Victoria went but have been too polite to enquire. Well....I must admit I'm disappointed. Don't get me wrong! I had a fantastic time and there was certainly a strong attraction there - on both sides. But...
*sigh*
First let me tell you what we did. First, we went to the Butterfly Gardens which is on the way from where the ferry docks to the city of Victoria. We had lots of fun with me trying to catch photos of butterflies in flight. Impossible! The tropical flowers were gorgeous, the birds were lively, and the chrysalises were fascinating. Then we went for a casual lunch down at the pier where the cruise ships dock before heading for Carr House, the actual house where the famous Emily Carr was born. We watched a 40-minute video about her life and works and now I want to ask Josie to go to the Vancouver Art Gallery again with me to look more closely at her paintings.
Since Carr House is just around the corner from where "he" was staying at his rental condo, I suggested we go there so I could see the view. "He" is on the 20th floor overlooking Beacon Hill Park and as the place faces south-east, there is also a view overlooking the water and Port Angeles at the tip of Washington state. We chatted for well over an hour before heading out to Victoria's Fisherman's Wharf. 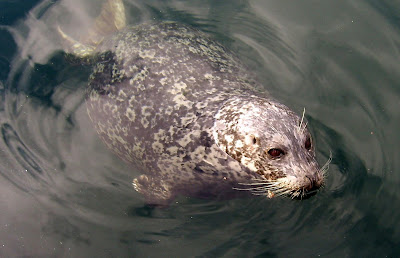 We wandered all around the wharf admiring the houseboats, the views, the fishing boats, the variety of food services, and the local musician playing his guitar. Two fat harbour seals bobbed up and down waiting for people to feed them and I got several photos as we watched. Then we pondered whether or not to have fish 'n chips there, but decided instead to go where "he" suggested - a nice inn/pub/restaurant place that he knew. So we drove to the James Bay Inn for a lovely dinner.
The waitress was so cute because she sensed we were on a date (even though to her we were - well, shall we say - old!) She took us to a quiet corner table and was just perfect about suggesting things, checking to see that all was okay with us, and even commented when she brought the bill that she hoped we were enjoying our date!
"He" drove me back to the ferry and waited until I was out of sight before leaving. I know that because I looked back twice to wave and he was still there watching me. I thought there might be a message waiting for me when I got home but no...nothing. Even after a few hugs and a peck on the cheek, I still have not heard from him.
*sigh*
In retrospect, I knew that he was older than myself, but felt that it wasn't so much older that things were insurmountable. Maybe I need a more mature man to care for me after my having to take care of everyone else most of my life. I can be rather hyper at times and he seemed like such a calming influence - I felt SO comfortable with him.
Today after chatting with a friend, I started thinking about all the things he's done in his life and it occurred to me that it was quite a lot if he were still the age I "thought" he was. Since he has been in public life, I figured it'd be easy to check him out online. So I did.
Bummer!
Turns out he is WAY older than I am, to the point that he could be my father! He's a good-looking man, in good shape, and with a good mind and quick wit. He's educated and has had several lucrative careers, one in which he's still involved.
But...
*sigh*
What a shame. It's too bad that we're not closer in age, but being a widow young in life was bad enough, and I really feel that it would be pushing the envelope to get involved with someone that much older than myself. Now I do realize that even I could go out tomorrow and get hit by a bus, but what is the point in pursuing a relationship that I know will end sooner rather than later. I want to meet someone who is young enough to still have years ahead to share with me and enjoy traveling and getting involved in other activities. 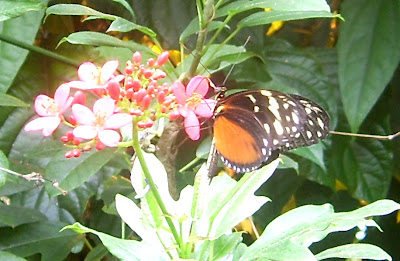 The one good thing that came out of this was that I now know that there are still sparks and smoldering embers just waiting to burst into flame - for the right man. So as they say, butterflies are free and so am I...still.
Posted by Leslie: at Saturday, August 02, 2008

Oh that is a bummer! Never mind. the right one is out there and watching the stars just as patiently.

At least you had a good day out!

Thanks Liz. Yes, I did have a good time wandering around Vicoria and seeing some of the sights. It's a beautiful city and my escort was charming. *sigh*

One evening as Cinderella! The right guy will come along. You are too attractive and energetic to be passed by.~

Well, Leslie, when the right man comes along, you will know - and he won't keep you waiting. I'm surprised he didn't email or anything :-/

Oh leslie, hugs to you. The song which is going through my mind id Dico Inferno.....Burn baby burn! You do sound like me, I too needed a calming influence 20 years ago and Jon needed a spark! I will be writing in David's WW about it cos there's a song!

By the way let me have your address, you've won a card!

By the way, HIS generation probably dont do e-mails like us young uns!

Why don't you contact him? You had a nice time, you have nothing to lose. And if you didn't realize how old he was, perhaps he's so fit and in shape that he'll live a long long time? I know how old you are, and if he's old enough to be your father, he must be pretty healthy to not look his real age.
Jamie

Age is just a number. Maybe he really digs you, but feels to old for you and he is torn. You know the kind of stuff they write about in angst filled romance novels. He's angsted. (angsted isn't a word is it?)

Although I was divorced and not widowed after 26 years of marriage, I didn't think I would ever find anyone. After seven years of being single I met my now husband on a blind date and now live in France. It all happened when I finally decided I was happy being single. Anyway, never turn down a blind date-you never know. Also, if you want to be inspired, go read the blog, The Bold Soul. A really sweet love story.

Leslie,
Thanks for sharing your encounter ;-)

On a different note, Roger is away this week and Chica and I are manning the Creative Photography Fort, if you wish to judge again, please drop me an email - dale(dot)rogers(at)gmail(dot)com.

Oh what a shame..as everyone says the right one is out there.

Yes you must read Bold Soul as Linda says..http://theboldsoul.lisataylorhuff.com/the_bold_soul/

first of all - kudos for putting yourself out there!

so many of us just give up - I think I did

If you like this guy and enjoy his company then why not go out together again? Just for companionship and fun.

Plus my Nana always said you're more likely to meet someone when you're seeing someone. She was a rebel.

I am so glad you don't sound bummed. Also glad you had a nice and pleasant evening. And remember, you really weren't expecting more, were you? Because it's going to happen when you don't expect it. At least you know you're ready, right! Fun!!

I was talking to my two sisters tonight as we got together for dinner - both of them said go for it. If he's a nice man, at least be friends. I'm just not sure...

I understand it must be scary, with him or with anyone, but if you keep looking for reasons NOT to see someone, you'll never experience the other reasons TO be with someone.
Jamie

How did it happen that neither of you knew the age of the other? Just asking, and not passing judgement. Age isn't everything Leslie, but he was the one keeping his from you. I wonder why? If he'd been upfront, I wonder what you would have done? Maybe said, "Age doesn't matter?" I half think it doesn't.

Ruth, I had guessed him to be around mid to late 60s, but then what do I know? He never commented on age, but if he had told me his age at the outset I would never have met with him even once. However, now...?????? I am really torn.

Oh, Leslie, I do empathise! Never mind: I have not given up hope yet and neither should you. I do admire you for having had the courage to meet him. Nil desperandum, my friend.

Leslie - cheers to you for still trying. You aren't giving up on life. So what if you get hit by a bus the next day? At least you had a little action and more fun that the one sitting at home not wanting to bother any more. Keep your chin up and remember - what's the worst they can say? No?
Heather

I am, at last getting caught up on blogs I visit.

Leslie I am so sorry it didn't work out, I guess it is for the best. At least you had a good day out.I hope the right one comes alone soon, (for me too I am still looking and hoping!)