Clinton Still in the Running

The Vancouver Sun reported on Friday, August 15th that Democratic delegates will be able to cast their votes for Hillary Clinton at the convention. However, under Clinton's photo it reads, "Hillary Clinton says she will be casting her vote for Barack Obama at the Democratic National Convention in Denver this month."

Why on earth would Clinton vote for Obama when she's still in the running at the convention? I have always supported her, figuratively speaking and strongly believe that she's the best choice for the entire country. As Josie mentions on her current post, Canadians love Americans, their politics, music, literature, pop culture and more because we're almost "culturally identical." We're also very liberal so most would more than likely support the Democratic party. We don't have the privilege of voting directly for our head of state and we find it exciting to follow the action south of the border every four years.

So Obama is going around speechifying as though he were going to be the next President of the U. S. of A. And now we hear it's not necessarily a foregone conclusion. Hillary has been very gracious thus far and has been trying to get her delegates to follow her in support of Obama for the sake of the party. But now that her name will be up there at the convention, who is to say that she won't get the nomination? I know, it's not likely, but it IS a possibility. Now that people "know" Obama a bit better, has anyone changed his/her mind about him?

I find Obama's statement with regard to putting Clinton's name forward at the convention a bit patronizing. He states, " I am convinced that honouring Senator Clinton's historic campaign in this way will help us celebrate this defining moment in our history and bring the party together in a strong united fashion."

Check out Bonnie Erbe's post that discusses whether Clinton supporters should be happy now that her name will be put forward for nomination at the convention. Bonnie states the following: From where many of them sit, the Democratic Party blew a perfectly good opportunity to nominate a moderate (instead of liberal), seasoned (instead of inexperienced) party leader (instead of Senate newcomer) with a long track record in international relations. ... when Russia invaded Georgia, Obama at first issued an appeasement statement, then the next day did a 180-degree turn, pressuring Russia to withdraw quickly. Such flip-flops on war policy are unacceptable but typical of what the party should have expected from a newbie. They also help explain why Obama is now tied with McCain in daily presidential tracking polls, rather than winning by double digits.

Better be careful, Obama! You put her name up there and you might be wiping egg off your face. 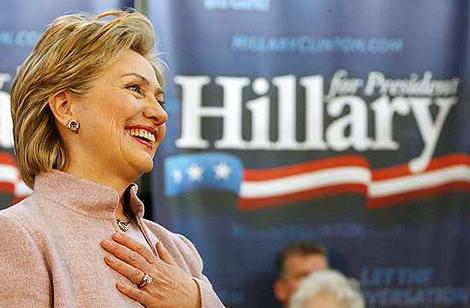 Your grandson is adorable!!! Aren't grandchildren just the greatest thing!??

But, Leslie, you MUST get your conservative on....we conservative Americans don't want Hillary OR Obama!!! Sorry, I usually don't express my political opinions.

Well don't worry, Nancy, because if I were an American today I'd be voting for McCain, too.

Thanks to the suffragettes, women now have voices and choices.

But most people are totally in the dark about HOW the suffragettes won.

Now readers can discover the shocking truth of how the suffragettes did it, and it’s as easy as opening their e-mail.

“The Privilege of Voting” is a new e-mail series that follows eight great women from 1912 - 1920 to reveal ALL that happened to set the stage for women to win the vote.

There are tons of heartache for these heroines on the rocky road to the ballot box, but in the end - they WIN!

Presented in a unique sequential e-mail series — each exciting episode is about 10 minutes — perfect to enjoy during coffeebreaks, or anytime.

Now I am worried about my Health insurance and expenses related to Medical supplies . What happens after new president takes office.

I happen to be reading your posts in the course of my smoke break, and We have to admit the whole article has been really useful and incredibly nicely written. I thought I'd allow you know that for some cause this blog site does not exhibit nicely in IE eight. I desire Microsoft would cease upgrading things. I have a query for you. Would you mind swapping blog site roll hyperlinks? That will be genuinely neat!