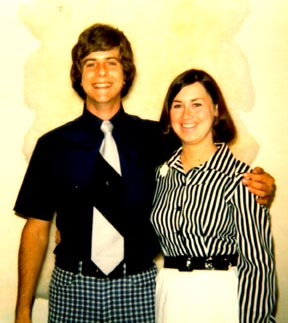 Suddenly, it's my birthday month - another year has come and gone and I don't feel any older. That's a good thing, right? Last year I celebrated a milestone birthday and had fun with family and friends, but this year will be a bit more subdued. That's not because it's the way I want it, but because there's not much I can do these days as I am STILL waiting for a surgery date. So what did this past year bring into my life? Let's get the "not so good" out of the way. There was a death (my Dad at age 86) and the diagnosis that surgery is needed to repair my lower spine. Also, my church disbanded.
However, the good vastly outweighs the bad. My younger daughter moved into her first apartment, has been successful in both her health and her job, and our relationship is better than it's ever been. My older daughter delivered a healthy baby girl in March. My son-in-law got a better paying and more secure job. I have several students that I tutor out of my home. I reached the 50 lbs lost mark! Friends from the United Kingdom came to visit and we had such fun. And I think I may have found another church to attend.
In our journey through life there are both high and low tides. Occasionally, we might experience moments of sheer bliss, but there are also those moments of sadness and loneliness. This is one of the times during the year when I can become a bit morose because my late husband never forgot my birthday - after the first year of our marriage.
It was Oct. 6, 1973, and I came home from work expecting Brian to greet me with a card, a gift, maybe some flowers and even dinner out (or at least take-out, since we didn't have much money). But as I walked in the door, he said something like, "Hi Sweetie! What's for dinner tonight?" Well, I thought he was kidding as I looked around the apartment and at him sitting there watching TV.

"Don't you remember what today is?" I asked him.
"Oh, yeah, Happy Birthday," he said as he continued watching TV.
"That's it?" I asked, incredulous.
He looked at me questioningly.
"Um, yeah." He suddenly looked a bit wary.
I burst into tears.
Apparently, in his family there had been no big deal made out of birthdays. No gifts. No parties. No special meal. No balloons. His mother would put a card at their place at the dinner table and that was it.
So I pulled myself together, got my purse and the car keys and drove down to the Safeway. I bought steaks, potatoes to bake with all the trimmings, and salad stuff. I bought myself a beautiful birthday cake and candles, some balloons, and some flowers. Oh, and I also picked up a bottle of wine.
I went home, set the table, cooked the dinner, blew up the balloons, opened the wine, and invited him to sit down to dinner. As we were eating, he commented on how nice everything was. And a month later, for his birthday I did the same thing. He liked it.
I said, "This is how we celebrate birthdays."
And from then on, we made a big deal out of each other's (and our children's) birthdays.
He may be gone now and even though I don't talk about him very much, he's never far from my thoughts. I just thought I'd share this little story of my first birthday with him as his wife. Please laugh - because that's what we did afterwards.
Posted by Leslie: at Friday, October 03, 2008

Oh my, Leslie! This sounds like one of Daryl's Tuesday Toons!!! I can just imagine the look on your husband's face as you made a big fuss over your own birthday.

I hope you remember him each year as you celebrate your birthdays now. That is a priceless memory. After all, not all memories have to be beautiful ones. Sometimes they can be a little bittersweet and all the more memorable for that reason.

Charming story Leslie but it did not work on my husband who was raised with the same attitude to birthdays.

Still he has other good points.

A good year on the whole it seems.

Priceless story as everyone has said..made me laugh..I can just imagine it..LoL At least he knew how things would be from then on:-)

I found it a little sad as well, why don't some people celebrate the birth day!!

I would of been very upset. I remember once Arni was in a hurry to get my card, when he gave it to me, I was sooooo upset, it was for a granny or old Aunt, I should of been grateful, but no, I couldn't hide my disappointment, he got me another one!!! I still have them both :-)

I think you handled that so well! What an example you are.
Fond memories, and I hope you have a great day this year too.

That's a great memory. I laughed because it reminded me of someone. I'm glad you can think of the happy memories. I hope you have a very happy birthday and that the surgery goes well.

What a loving memory. Oct 2nd my best friend at college was killed in a hit and run accident. She was on her bike the car knocked her off. She was 22. It was along time ago some things you never forget. HAPPY BIRTHDAY LESLIE!

Oh my! I'm glad you educated him properly in the 'birthday way'.

What day is your birthday? have I missed it?

Leslie, LOL. I can relate. My birthday is two days after Christmas, and no one ever remembers it. Ever. If I'm lucky I get invited to someone's house for leftover turkey from Christmas. I have never, ever had a special birthday party done just for me. I can't even imagine what it would feel like.

We seem to have another fall hurricane blowing in today. Stay out of the wind!

Normal lighting has cured me really. My problem now concerns my macular degeneration which is causing dimming so that poor light bothers me. The lights just have to be brighter.

You know my hubby and his family don't make a big thing out of birthdays either. I on the other hand decorate, and bake very similar to what you do. My youngest daughter turns 16 on the 25th of this month....I am organizing a sweet 16 party for her with all the trimmings....inviations are out....

My birthday this year...hubby did nothing...nothing....well ok..he bought me a card....we went out for dinner...I paid...it was the most distressing birthday I have ever had...my daughters were all busy...so I didn't get to celebrate with them until September at which time I cooked again....

I hope you have a fantastic Bday!

My hubby and I don't do much for birthday.
During our birthdays he laid off from work and money is lot tighter then.
But we give each other cards then.

Many sad personal reflections today. Good that you can laugh about it in a sad sort of way.

I love his tie.

Oh no!! Birthdays were/are a big deal in my family too. I too would have burst into tears!

Wonderful post, Leslie. Of course, your husband will always be in your thoughts and I am sure he admires you, from "up there" for all that you have achieved since his passing: you did not cave in, you are a wonderful mother and grandmother and you still look very glamorous. So be poroud of yourself - you deserve to be.

From sadness can come happiness, and certainly a great story!!

My entry for Photo Hunters is here

Thank you for stopping by :)

I admire your spunk and clear thinking. Many people would have gone in the bedroom and sulked but you handled it beautifully!

I really enjoyed reading this so thanks for sharing and have a nice weekend!

This was a wonderful post. I loved it, especially the birthday celebration - or none celebration. Well, if one never has been celebrating it within family, o wonder this can happen. How great that you could laugh about it later!

Well, we're both Libra's then. My birthday is... now actually, because it has passed midnight so it's the 5th over here!

Congratulations to us both, well, it's almost your turn too :-)

We celebrated all birthdays in my home growing up. My husband's family doesn't make a big deal. In fact, one birthday, he hadn't said anything, so I was sure he was having a surprise party.....he had forgotten! I made sure that didn't happen again!

Great shot and a great story. I'm glad you both laughed about it afterwards!

Such a beautiful story!

This is my birthday month too. Have a good one! :)

HAPPY BIRTHDAY LESLIE!!! birthdays are a big thing for my family, and i celebrate mine the whole month. this year was very low-key for me as i'm still recuperating from my grandson's and friend's death, in addition to a couple of other things and didn't feel much like celebrating.

i'm sorry to hear your church disbanded. i remember when you found this one and how excited you were.

the good thing about the lows in our lives is that we grown stronger thru them, and then we're able to help others. God bless you Leslie, and enjoy the rest of your weekend!

Happy Birthday my good friend. Leslie... I'm just starting to buzz around the blogs slowly and I just cannot thank you enough for the beautiful card. That was a wonderful surprise... I had tears when I opened it up. It was beautiful in the fact that someone from the blogging community had sent me such wonderful supportive words as you had done through the mail.... you are super sweet!!
I wish you were here so I could give you a big hug... thank you, Leslie.
You really made me smile... =) {{Hugs}}
I will try to come back to blogging soon, I'm getting stronger each day!
Luv Michele

Lots of sad places to visit this week for Hunters.

Happy Birthday this month. Thanks for stopping by for a visit.

The day this happened, Oct 6 1973, my husband Jason - your son-in-law, was being born in Calgary Alberta.

The world works in mysterious ways...

Oh, I am laughing, Leslie! And happy birthday to you, too. Sometimes you just have to teach people the right way to do things! Loved this post.

Touching and you were so wise to give your hubby a practical lesson with no moping. I like the positive slant instead of stuffed down hurt feelings.

great post. it was the same on my husband's side. he was able to adjust to the way i like things to be. :)

sorry for your loss.

thanks for the visit. :)