M is for MOORS

Just click on the photos to see them in larger format.
In the summer of 1998, I took Jamie (daughter #1) on a Trafalgar tour of England and Scotland. We also touched into Wales to see Tintern Abbey and Llangollen (where we sampled Welsh ice-cream!). It was a great time of bonding and the only not-so-nice thing that happened was that Jamie got sick in Glasgow and had to miss the day we drove from Grantown west through Culloden (where Bonnie Prince Charlie was soundly defeated) to the Isle of Skye. However, by the time we returned, she was feeling much better and had gone for a little walk to explore the town. When we toured the United Kingdom 10 years ago, Jamie and I were treated to some of the most beautiful scenery outside of our own home. 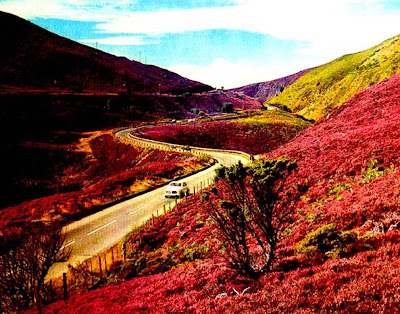 Although we arrived on the Scottish moors just before the heather was in bloom, the vistas were breathtaking! I scanned this postcard by J. Arthur Dixon to show you what we missed, and it just makes me want to return to actually see the moors in full bloom. 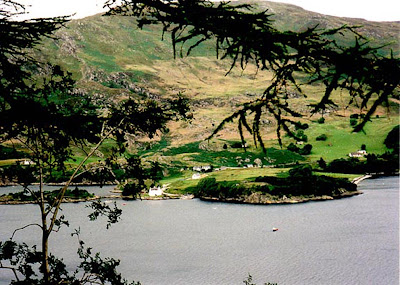 However, we certainly were not disappointed in what we did see! Here is a shot of Loch Ness looking across at the hills above. Can you see the little boat on the water? Remember, these are photos that were taken in 1998 with my Ricoh TF-900 and I had to scan them in. Sorry if they're not absolutely crystal clear. 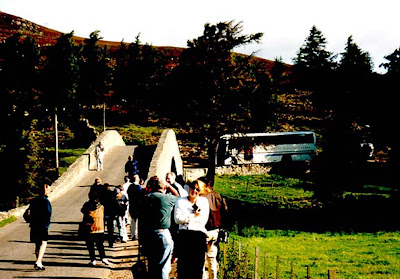 One of the most beautiful spots that we saw was as we crossed the Grampian Mountains in the north-east of Scotland. At one point the bus stopped and our guide told us we all had to get off. At first we thought he was joking but then he explained that the old bridge we needed to cross wasn't able to take the weight of the bus PLUS all of us. It was rather exciting to see that huge modern bus slowly cross that ancient bridge and we all enjoyed standing around in the blustery wind taking photographs of each other and the scenery. Here we are on the other side of the bridge waiting for the bus to cross. That's Jamie in the white sweater and black pants. 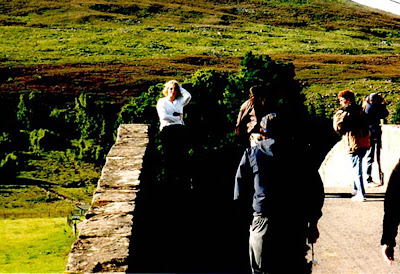 Here she is again just on the rise of the bridge and you can see in the background that the heather is just starting to bloom. I love the roll of those hills (that the Scottish call mountains) and it made me think of the book "Wuthering Heights" (even though that took place south of this area in Yorkshire). 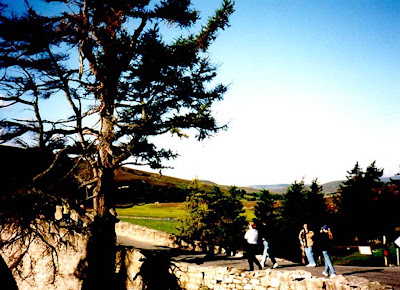 Here, I took a photo of Jamie crossing over the bridge. Just before that, she herself had taken a quick shot before everyone else started over. When she had her photo developed, she discovered that she'd taken a prize-winning photo so entered it in a local contest. And YES, she won! Her prize money paid for the enlargement and framing of her photo and it hangs proudly in her dining room to this day.
I asked her to take a photo of the picture and send it to me so I could include it here. This is the best she could do because it's covered by glass and it was hard to not get a reflection. Anyway, I now give you my darling daughter's prize-winning photo! 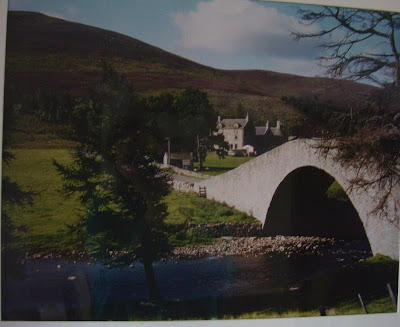 ABC Wednesday is hosted by Mrs. Nesbitt and you can join in or just take a look at the photographs of participants by clicking RIGHT HERE.
Posted by Leslie: at Tuesday, October 14, 2008

Glad you enjoyed your visit to the UK - yes the moors can be very beautiful, in a rugged sort of way, when the heather is in full bloom..

Some day I would love to get across the pond and see country like this. No one can ever take away your memories!

I was thinking of Wuthering Heights, too!

The colors in the first picture are stunning!

That first photo is amazing. *sigh* I have so many places I want to go!

What a briliant selection of M for moor photos....I just love walking on the moors especially Dartmoor in Devon but my favourite place apart from where I live is the Isle of Skye. Stunning scenery.

A place I've never been, thank you for showing us. You're daughters winning was lovely. Did you see any MONSTERS in Loch Ness?

Oh you are hitting me where it hurts :0)
I need to get back to this wonderful country and walk along new paths to see all the old wonderuful architecture that Great Britain affords!!
Have a wonderful Wednesday Leslie!

Those are all such beautiful pictures. Love the award winning last one! Happy ABC wednesday!

My M entries are posted here and here. Please drop by if you have time. Thanks a lot!

I have been there to, and I loved it. Have a nice day. Thank you for a stunning photo of the moors:)

Scotland is something special. It is always a pleasure to go there. Thank you for a well guided tour!

We live in a world of moors here. I like the contrasts with tree filled valleys.

Nice, but the first must be manipulated. Right?

What a lovely trip you had. And it didn't rain all the time!

Thank you for taking us to the moors! I also enjoyed visiting the UK, Scotland and Wales. My husband and I went camping in Wales three times together with our children. It was so beautiful and interesting.

I think the photo through glass of the bridge is very atmospheric. Almost like a filter.

I love Scotland Leslie and often have holidays there, it's a three hour drive to get over the borders from where we live. We are just a 40 minute drive from north Wales and enjoy many day trips there. Yes the Welsh Ice cream is delicious.

Thank you for taking us along on your tour, Leslie. We had a splendid time. ;-)

Some years ago we were on the road to Braemar from Scone and the hills were a rich purple from the blossoming heather. We were there at just the right moment. Love the photos think I recognise the little bridge! Scotland is just so beautiful at all times of the year.

Leslie, I so enjoyed this description of your trip. I have always wanted to take a tour of the English countryside (and Scotland and Wales), visiting places like the moors that inspired the Bronte sisters and seeing Tintern Abbey. Seeing these wonderful places with your daughter must have made the trip extra special!

Leslie thank you for taking us on that tour.
Does your daughter know that you can buy non-glare glass?
We have started to replace all the glass on our favourite pictures here in our home.
It is a little bit pricey but is well worth it because there is NO GLARE whatsoever.

Wonderful M, Leslie, if I listen hard enough I can Heathcliff calling across the moors for his Cathy ....

I want to be there too!!

Looks like you had a great 'Trafalgar Tour' and the photo's prove it. Shame you missed the blooming heather - it is quite breathtaking.

Your daughter definately has an eye for comosition!
In your last post tne photo of Vancouver nestled beneath the North Shore mountains with the sun light on the city and the purple clouds, thats a prize winner too!
Glad you and Jo had a great time.
Happy Belated Thanksgiving.

Hi!
Awesome photos all of them. Thanks for trip and sharing! Thanks also for visiting my place. Take Care!!

Lovely set of photos :-) Thank you for sharing!

I am in awe of those hues of oranges and reds in that first photo... WOW... a delightful post, Leslie!! =)
~Michele~
Mountain Retreat- Canada

What a dream trip that was. Beautiful Moors and a wonderful bonding time.

Excellent M. My parents honeymooned on the Isle of Skye and I lived for a while not too far from Langollen, and was brought up just across the border from Scotland (into England).
Great shots and memories.
Good on Jamie! Great shot.

I didn't know how colourful moors could be. I invite you to come see my "better" mouse trap. -- Margy

I would love to see the moors in person....

A worthy prize winner, indeed. Neat story about the bus and the bridge. Beautiful scenery up there, but I'd have to visit during the warmest season - my Florida blood can't handle those chilly northern winds. :)

Great photos and a grand tale of a memorable tour. That bridge looks like the Atlantic bridge on the way to Seil but maybe not.

First, "M"is for "merci" for your kind comment!
I visited these marvellous countries ... a long time ago.
I know also Dartmoor !
Beautiful colours in the poscard !
"Wuthering Heights" is a marvellous novel
Miss Yves

I love moorland - all the open space and the different colours in different seasons. Beautiful "M" post.

This place is awesome blooming or not!

Thanks for your fun words at my Mono photo post. Loved the "BWWAAAHHAAAA...." LOL