ABC Wednesday - T is for Tractors, Totems, Trees, and Tugboats

To start off today, I'm bringing you T is for tractors, both old and new. On the left, is an antique tractor I found at the side of the road along an old farm road and on the right is a newer version that was on display during Rivermania last summer. (click to enlarge) Ladner was created as a fishing village but then developed as a center for farming as well. 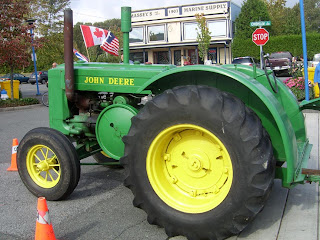 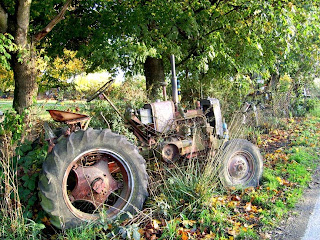 You'll also see totem poles in Ladner. There are a few outside of the village's museum in honour of the First Nations people of the area. For thousands of years First Nations people lived along the Fraser River, turning to the sea and the river for salmon and shellfish, the mainstay of their diet. 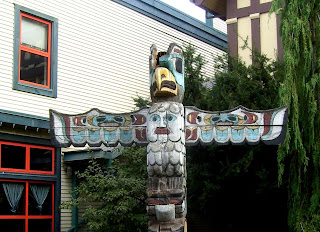 Finally, T is for trees and tugboats because fishing and forestry are two major industries in this area on the western coast of Canada. 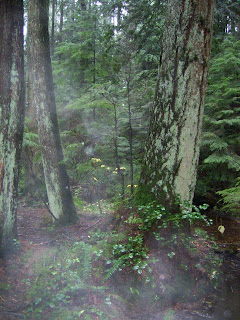 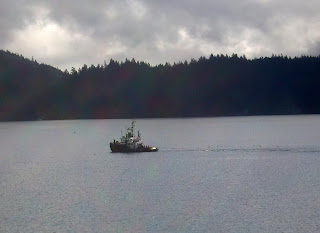 Tis terrific.
A beautiful part of the country you live in.
Love your choices for T.

The early history of the North West coast would absorb me utterly if I lived there. I think it is special.

We have tractors, trees and tugboats(!), but totems are scarce. However - we have got one. We received it from Seattle (which is our sister-city in the US) around 1960.

Nice photos. Is the the place where you are staying ? They looks lovely.

A wonderful part of the world Leslie, which now you will be seeing in a great way!

I remember those antique tractors in the Lake District when I went on holiday. Thats the kind that were used.
Lovely totem poles.
Really pleasing post.

I love, love, love the tractors!! Heh!! That restored tractor is a John D and was made in Waterloo, Iowa! (John Deere is Iowa's largest private employer and has several manufacturing plants here in the state - but it is headquartered in Moline, Illinois - just across the Mississippi River.)

The D tractor was made from about 1923 until about 1951. That machine in your picture was probably made during the 1940s.

So when you see one of those green and yellow tractors, remember you are looking at a bit of Iowa!

Take care -- oh, I really like the totem poles, too! When I get to Vancouver I have them at the top of my list of things to see!!

I meant to say it was a John Deere D tractor, but you could probably figure that out.

A very high percentage of those tractors were produced with steel spoke wheels since rubber tires did not come along until after the war for the most part. Also, many of those D tractors did not have a finished look - there was no tin around the engine, etc. They were referred to as unstyled tractors.

When I see a fair I like to see the old farm equipment.

Ladner sounds fascinating. There's something so nostalgic about that old tractor!

Sorry, a little late getting around this week. We are now down in LA so I can do a week's worth of work for my old school district. I wish I was home watching a tug while sitting under a tree along the sea walk next to the totem poles right now. - Margy

What a great selection of T's Lesley! I'm so glad you didn't let me down when I predicted trees would feature today ;)