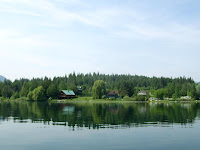 Click on the photos to see them in all their glory!

Nine years ago, six friends who used to play hockey together on the old Burnaby Grizzlies team got together for a "Big Chill" weekend (remember the movie?). Some of these guys had moved away and as a result, hadn't seen each other for many years. Some of them weren't even talking to each other due to some old spat. But they all realized that because they were all getting on in age, they should let bygones be bygones and reunite their friendships. The Big Chill Weekend was born. 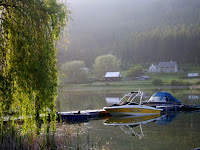 This year, I was included with the other wives and we all had a great time at White Lake in the Shuswap area of British Columbia. The guys went fishing one day and everyone played golf (and I use the term "played" very loosely) another day.

On the last evening, they had a ceremony of sorts where prizes were presented. My sweetie won the prize for "the shortest drive" and we all had a great laugh about that. (He whiffed the ball and it just went plop in front of the tee!) Someone else won a putter that had been made for the occasion - it was a real hit! And the biggest prize, the Rusty Skate Award, was presented in absentia to the sixth member of the group because he's gone through a terrible or 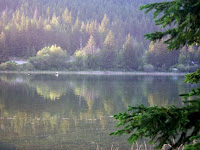 deal these past few months and almost died. As a result, he couldn't be with us this year. 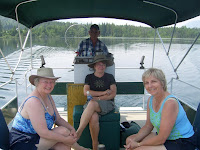 While the guys were fishing, the girls went out on a pontoon boat with Captain Al (he doesn't like to fish) for two relaxing hours floating around on the lake. We found the guys in their boats and took a few photos of them, but they yelled at us to go away because we were scaring the fish. And Al took a photo of four of us "girls" at the front of the boat.

There is so much wildlife at White Lake and the ducks are so tame, they'll follow you everywhere, even allowing the ducklings to come close. We also saw lots of turtles, loons, otters, and all sorts of birds. I got lots of nature photos, and another day, I'll show you more of them. All in all, we had a great few days at White Lake before going to Peachland with Al & Heather for another 2 days. In the meantime, I better get back to the laundry, housework, and garden here. Now "that's" another post!
Posted by Leslie: at Thursday, June 11, 2009

Leslie, the weekend sounds and looks wonderful - just as much as the lovely sparkle I can see in your writing - You are very happy, you with your dear "knight"

We love going to osoyoos in the summer. The water's warm and it's perfect for water skiing. Not that I ski but....the guys love it!

I was wondering if you were all right as you'd been a bit quite. Glad you were off enjoying yourself!

Great to have such a lovely weekend with friends.
Glad you had such a good time.
Lovely pictures.