Z is for ZAMBONI 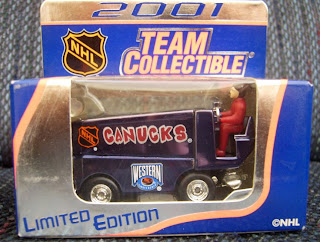 In 1949, Frank Zamboni Jr. invented a machine that transformed the job of resurfacing an ice rink from a three-man, 90-minute task to a one-man, 10-minute job. Go here to read all about the Zamboni, its history and how it works.

As some of you might recall, I met my fiance at an ice-skating rink in Vancouver. I loved to skate with him because he played hockey and could literally whiz around the arena, and all I had to do was hang onto his arm. He played pro hockey for a year, but because of an injury wasn't able to continue to play professionally. However, he still loves the game and goes to all the Vancouver Giants games during the season. 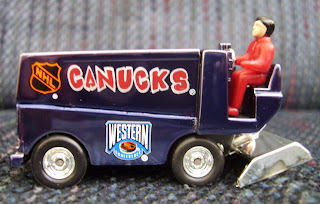 When we first started going out again last fall, he gave me something to give to my grandson. I've kept it because I want my fiance to give it to my grandson himself. It's a 2001 "Team Collectible" Limited Edition NHL Vancouver Canucks miniature Zamboni. It happens to be the sixth in a series of licensed Diecast Collectible Mini Zambonis and I just know my grandson will treasure it. I hope we can get together soon so they can get to know each other and enjoy their time together talking about hockey. I think grandson's Dad might enjoy it, too.
ABC Wednesday is hosted by Mrs. Nesbitt. Click here to see other participants' entries.
Posted by Leslie: at Tuesday, July 14, 2009

That was a very clever Z entry and interesting too.

What a great choice for z! We are fond of it over here in the Netherlands as well. Not so much for the ice hockey, more for the speed skating.

A great, original choice !
and I love your "avatar/imago"who is skating !

Very clever and original post for Z. I just love the word zamboni. It got a certain flair to it. Thanks for the little history lesson too.
Your grandson will definitely treasure that special gift. Great story all around.

Ooh, I've always wanted to know how those things worked! I still can't believe they can do all that so quickly and leave the surface freshly frozen and unruffled!

The miniature zamboni is a cute gift. I always wondered where those things got their name. Now I know!

Definitely not your everyday machine or Z, for that matter. Nice to have a personal touch to it, too.

A great choice for Z! Your grandson will certainly enjoy his present. Glad you shared the information about the inventor; zamboni always sounded like an ice cream flavor to me:)

Very interesting and what a lovely gift for your grandson.

a lovely gift, yes It would be great if Lorne gave it to Noel. x