Okay, so it's 5:40 AM and I start hearing yipping coming from downstairs.  AAAGGGHHH! Not so early, puleez!  I ignore it for a bit waiting to see if "you-know-who" would wake up, but NOOOOO. So up I get up to put herself outside.  At least she had the good grace to take a loooooong whiz before I emphatically put her back to bed in her crate.  Yip-Yap....NOOOO! I yell at her!  So I creep back upstairs and get nice and comfy back in bed for about 20 minutes when she starts yapping again.  Himself has been exhausted from work lately, so I get up and put her out again for another quick whiz. I get her her brekkie, but no she doesn't want to eat - yet. So I do my usual...make a cup of coffee for myself and settle down with the morning paper.  She seems to have learned that that means no playing, just settle down.  She wanders idly over and nibbles at her brekkie and then wants out again.  So I watch to make sure she does her "thing" and, both of us relieved, let her back in knowing that I can relax with the daily crossword.

Herself settles for a while, but then wants out again, so I let her out to run around and chase the birds.  Then I notice she's digging!  GASP!  It's wet out there and she's going to get filthy.  Ah well, himself said he'd be doing the bathing - outside with the hose!  Finally, "she" decides she's had enough and wants inside so jumps at the patio door with her filthy wet feet yapping loudly.  By now it's 9:30 am - I haven't been able to get dressed or even brush my teeth, let alone have any breakfast of my own.  I tried grabbing her as she came in and tried to wipe down her feet, but herself is so hyper she starts biting at me (in fun, of course). So I throw her back out and upstairs I go, leaving a yapping animal at the door and tell "you-know-who" it's time to get up because "you said you'd bath her outside with the hose."

So himself comes downstairs, takes a look at herself and says "I'm going to have a shower."

The neighbours are going to complain and I say, "Take your shower AFTER you bath the dog!"

So, grumble grumble grumble....he takes her upstairs (me offering to help, but getting an emphatic "Don't bother!")  He gets her all clean and then she runs around all excited again before I lock her in the office with me and get her calmed down.  Letting her up on the one nice soft lazy-boy chair with her stuffed dog Scotty, she settles down and goes to sleep.

By now, I'm half dressed and have managed to brush my teeth while himself bathed her.  Then "he" comes in and gets mad that I'm letting her up on the furniture.

I can hear him downstairs with her now and he sounds more like himself...lol...aha he's taking her for a walk!  Ah, peace at last!  Now look at this photo...how can I stay mad at her for long? I wish himself hadn't been so cranky when he was bathing her so I could have caught a photo!  Ah well, I'm sure there will other baths...soon.  *sigh* 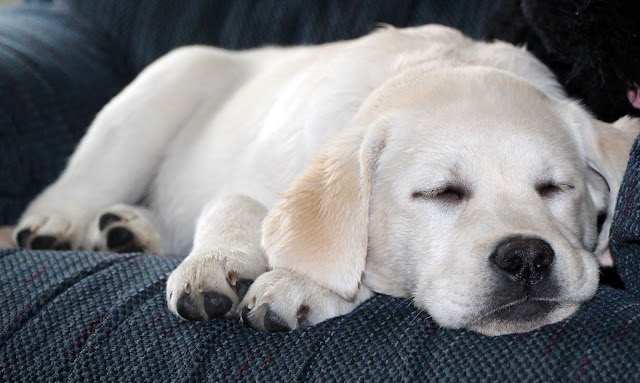 Oh my word Leslie ... sounds like a nightmare getting up at that time ..

Of course You know who , would not wake up ... it is like having a new baby , a man will sleep through it all .. my son does.. but when the baby is quiet , she is daddies little princess LOL xx

Ha ha brings back so many memories of when we got our puppy and he would not settle.He liked the smurfs christmas cd that my daughter had at the time(no dont ask me why he liked it)We used to put it on for him when we went to bed and he would settle down but once it had finished he would start the yapping until I, yes I !!went back down to put it back on for him,and that was how I carried on for weeks.Bilko loved his baths in the bath when he was a puppy and out side with the hose when he got older.They are fun even when they have you up all hours of the night.Have fun Leslie love Jill xx

Oh, she's gorgeous and looks so much like our Sam, who's been gone for many years, but he was a good old boy! But that reminds me how hard those early days with them can be!

Hahaha, having kids a little later in life sure is exhausting, isn't it? Oooh, this brings me back, too, too funny! What a darling photo, and such a look of innocence there - how on earth can we believe she causes all that chaos?? Wait til she grows - Jake is far too big to carry, and steadfastly refuses to get in the bath. I have to don a swimsuit, and temp him into the downstairs shower with a peeled banana, before trapping him in the stall with me, to bathe him.

Soooo cute! Fun post! You must be up for the challenge!