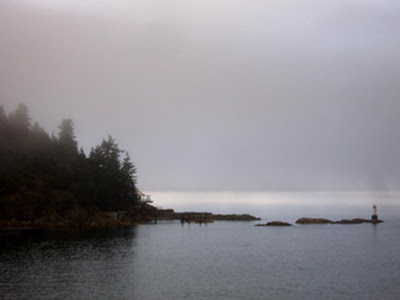 Click to enlarge. Photo taken from the ferry as we left Horseshoe Bay heading towards the Sunshine Coast. Grey skies here but we were hoping for real sunshine when we got there. 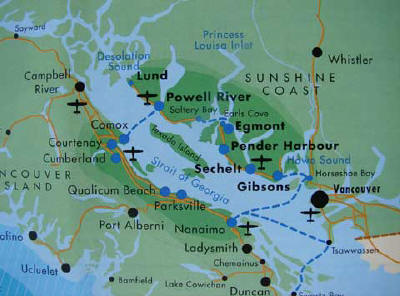 As I mentioned in my ABC Wednesday post below, I had three lovely days away on the Sunshine Coast of BC. My friend and I drove from our little village of Ladner (see "Tsawwassen" on the map) through the city of Vancouver to Horseshoe Bay to catch the Langdale ferry to this remote coastal area of BC. The ferry took us into Gibsons where we stopped to look around and have lunch at Molly's Reach, the restaurant. Perhaps one of Gibsons biggest claims to fame is as the site where the long-running TV series The Beachcombers was fil 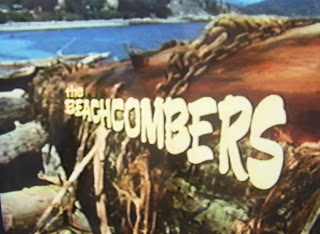 Although the film crews are long gone, Molly's Reach restaurant and the pier (where much of the filming was done) are still there, and several of the cast, notably the late star of the series, Bruno Gerussi, chose to make their homes here. After all, they knew there was more to Gibsons than The Beachcombers. 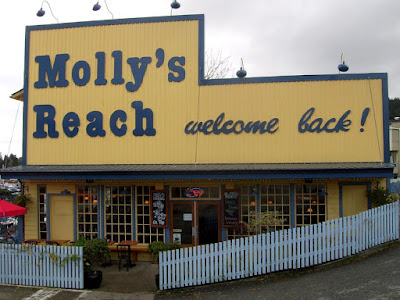 We drove the lower road into Gibsons and I was so excited to finally see this famous place. Around the bend suddenly appeared the bright yellow facade of Molly's Reach Restaurant and I took a shot right through the windshield of the car. Later, however, I took a "proper" shot and Cathy took a photo of me standing in front. We entered and found a spot near the back of the restaurant that overlooks the marina and studied the menu. It was a day for soup. Hearty soup. So we both had a big bowl (I had the thick, stew-like white clam chowder and Cathy had the thick, stew-like pea soup) and we shared some fantastic sweet potato fries. Yummy! 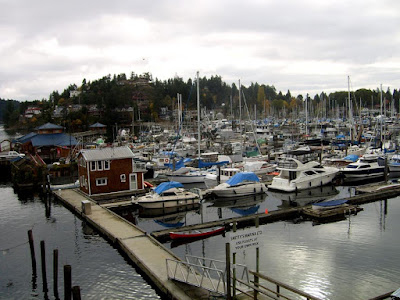 Then it was time to stroll around to see a bit of the town. After wandering the pier for a few minutes to admire all the boats, we headed into Molly's Lane where we found lots of artistic shops with zany names like the "Waltzing Whippet" and a fence covered in amateur art opposite a more professional fence depicting water, waves, driftwood, and seabirds. You can see a portion of this fence on my ABC post below. There was also fantastic signage showing what you'd find down Molly's Lane. 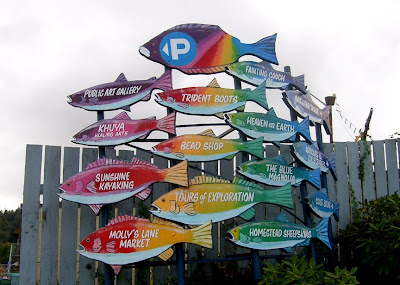 Click to enlarge and see the names of the shops and services. Which is your favourite?

Then we discovered the Persephone! This was the main character Nick's boat on the show. Read more about the The Beachcombers here. Here are a few shots of the boat. Be sure to click to enlarge, especially the photo of the sign because you should be able to read it. 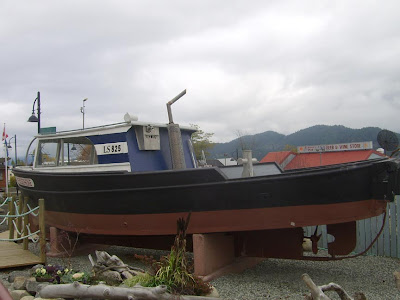 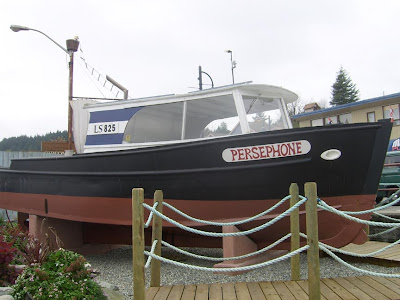 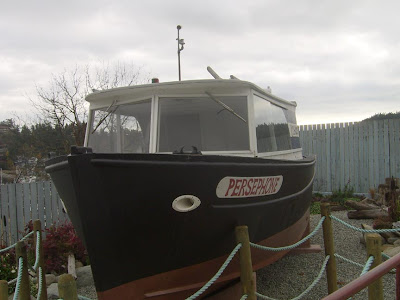 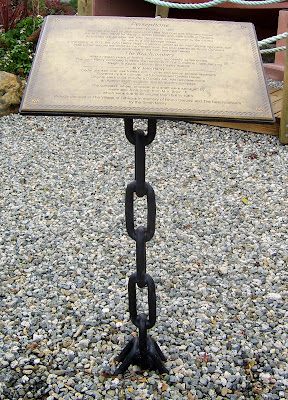 After that, we decided it was time to head up to Sechelt where we were staying. So off we went and checked into the Bella Beach Inn (don't stay there!) before heading off towards Porpoise Bay.
I'll leave you today with another shot I took from the ferry as we were heading towards Gibsons, but do stay tuned for more photos of our visit to this scenic part of British Columbia. 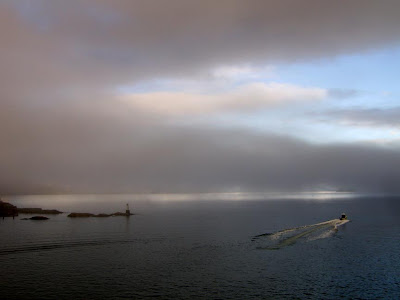 Click to enlarge. You can see there's blue sky ahead!
Posted by Leslie: at Wednesday, November 12, 2008

You're heading my way. I'll be watching to see how your trip comes out. -- Margy

Hi Margy! I was actually thinking about you when we ended up at Earl's Cove, and told my friend Cathy about you. Maybe next time we'll get over there. But we didn't have enough time this time.

How wonderful Leslie! Loved the boats and the sky in particular!

I could do with a visit to the Sunshine Coast right now. It's really bleak here in Cambridgeshire.

I love, love, love the Sunshine Coast! Those photos are wonderful. It sounds as if you had a fabulous time.

You didn't happen to see any feet while you were walking along the beach, did you? *heh*

Hi Denise, there are SO many boats over there as people use them to travel to and from all the different islands around abouts. We did have great weather on Monday and it was sunny and mild all day as we drove all the way to Skookumchuk Narrows - stay tuned for that part of the story.

Hi Ellee, it's usually bleak here this time of year, too, but we lucked out with one fab day!

Hi Josie, it's gorgeous out right now but I can hear the wind whistling outside! The trees are bending and I don't think any leaves will be left on the trees after today!

Oh, how fun and pretty! Your trip is better than my trip! :)