Be sure to click on the photos to enlarge them and see the details.
The last place I'd like to tell you about is Smuggler Cove on the coast near Sechelt. The origin of the name is subject to much speculation. One theory holds that the bay was used by one Larry "Pig Iron" Kelly to pick up Chinese labourers to be smuggled into the United States after the building of the Canadian Pacific Railway. Another story is that the concealed cove was used as a transhipment location for the smuggling of bootleg liquor, produced on neighbouring Texada Island, into the US during the prohibition era. Given the cove's proximity to Secret Cove, one can easily believe that there might be some connection to either or both of these stories. 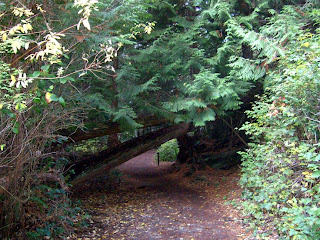 We first stopped at the provincial park and began a walk through the forest. However, after emerging through the heavily wooded area and over the boardwalk, we decided that it wasn't the right time to do such a trek. It was getting a bit late in the afternoon and we didn't want to be caught there in the dark. The boardwalk bridged a very cold and wet marsh and had a railing on only one side. So we turned back and headed to the actual cove. 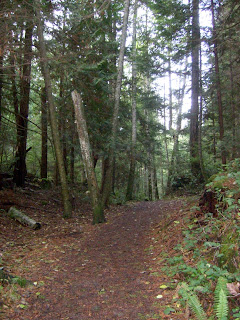 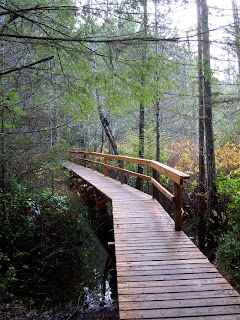 Here is a photo of Smuggler Cove. You can see why it would have made a great place to smuggle either Chinese workers or bootleg liquor. 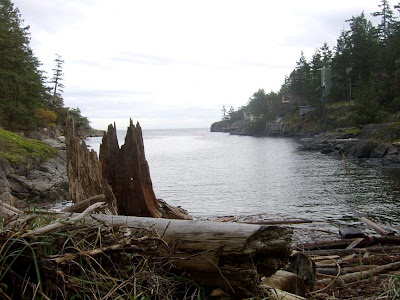 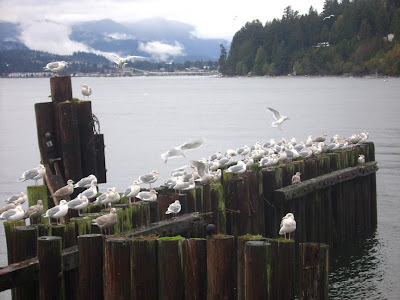 Our last morning on the Sunshine Coast dawned miserably dark and rainy. So after a leisurely breakfast of giant muffins and coffee next door to our "inn," we packed up to head home. However, I first wanted to walk out on the pier at Davis Bay to get some photos of those cheeky seagulls who seemed to live there. There must have been hundreds of them, lined up on the ledge of the pier. As I walked towards them, they'd one by one fly off and go over to some pilings at the side of the pier and wait there until I left. I took a video as I approached the seagulls, but it won't upload. Maybe another day. In the meantime, if you ever get the chance, I highly recommend you take a trip over to British Columbia's famous Sunshine Coast. I hope you enjoyed this virtual tour that I've given you over the past few days.
Posted by Leslie: at Monday, November 17, 2008

Hi Leslie, You've really captured the Sunshine Coast in your great photos. Thanks for looking up my B&B. I understand what you mean with 2 adult travel buddies who are great friends, but don't necessarily want to sleap together. Our family suite gives each person a room of their own, but is a little more expensive for only 2 people. For this situation, I would recommend Caprice B&B and Grant's B&B which are both in Gibsons. Caprice has a large room with 2 queen beds. Grant's is a large suite with 2 separate queen beds. Both are run by welcoming & friendly women. Good luck on your next trip!

Oh I've so enjoyed this series of posts. I'm hopelessly smitten with Vancouver and the BC coast and so dearly want to do so much more exploring. Thanks for the photographic fix/inspiration.

Thanks C for all that info. I've saved both the B&Bs in my favourites and we'll check them out next time. I really appreciate your help.

Hi Rob, if you ever get out this way with your other half, be sure to let me know you're coming! :D

Yes i did enjoy the virtual tour and yes you can see why it is a good place to smuggle!

The Sunshine Coast is absolutely beautiful and I would love nothing more than to come out here and visit it... it's beautiful. Your photos show it! What an amazing tour you have given us! =)
~Michele~

Oh and about the snowfall... it has snowed here a few times, the mountains are gorgeous as you can imagine... beautiful winter wonderland... but the temps are starting to rise quite dramatically in the last day which was quite a surprise!! Some mega melting was happening which I don't mind but some snowfall is expected again tomorrow morning as temps drop once more...