S is for SHAG

Shag carpets were developed as a deep pile style of carpet during the mid-20th C and were considered to be essential components of contemporary decorating schemes in the 60’s and 70’s. While many people think of the shag carpet as a relic of the past, the fact is that long yarn carpet designs are alive and well in the 21st C.

I remember the first house we bought in 1978 that had shag carpeting everywhere. The master bedroom had orange shag and the living room had brown shag carpeting. (Of course, the fridge and stove were that golden colour that was so in style in those days!) And does anyone remember those British movies with the ShagMobile? and in Britain the word "shag" has a totally different connotation from American or Canadian slang.
So when my girlfriend slash real estate agent slash stager recommended I get a shag area rug for my living room, I was a bit concerned for her sanity. However, upon further research, I saw that shag really is 'IN' again as long as it isn't wall-to-wall like it was in the "olden days."
I went to a very prominent business that deals in high-end home furnishings (their wholesale outlet) and as soon as I walked in, I noticed a pile of area rugs. On top of the pile was THE rug! After minimum discussion (what's the size? what's the price? what's the quality? what's the policy if it doesn't look good when I take it home? blah blah blah) I said, "I'll take it."
Knowing I had only 48 hours in which to return the rug, I quickly laid it down. With a bit of adjustment as to its proper positioning, I stood back and said to myself, "Perfect!" And here it is! I really like the texture and the mix of colours in the rug. Click on the photos to enlarge them. 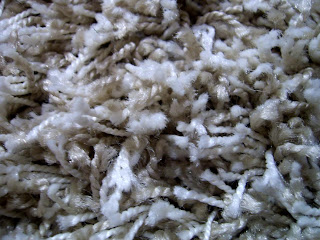 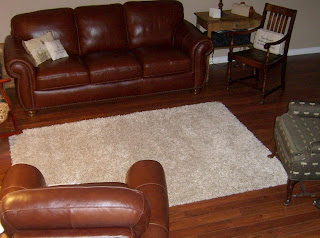 ABC Wednesday is brought to you by Denise Nesbitt and you can view other participants' entries by clicking here.
Posted by Leslie: at Tuesday, November 24, 2009

Interesting post for the day! And, yes, shag is alive and well! Fun shots, too!

Yes, I can see a very small one would have possibilities, but wall-to-wall!!! It terrorizes me....

Hmmmm interesting how someone ELSE you know suggested that a while ago....I'm not gonna say who, but her name starts with JACLYN....lol

the new stuff is pretty cool.

I was drawn to the post by the title!
Yes...... I remember those shag pile carpets & rugs.
Someone I know had a fitted one all through the lower groud floor.
Just think of all that play dough and all the bits of food and other gubbins that families drop into carpets! Ugh!

Interesting that shag is alive and well. I guess what they say is true. What goes around comes around.
I do like your rug and it gives a warm touch to the room.

We always called them shagpile to avoid the connotations implied by calling them just shags which are sea-birds.

It looks great - adding texture against the smoothness of the leather furniture and the polished flooring. Well Done Leslie!

I was wondering about your sanity for this round of S, since my connotations are more the British version of shag! However, I love how it's not what I expected and instead a decent shag! (Even though it still sounds strange to me)

S is for Shag is a very creative post! Living in North Carolina, I half expected "shag" dancing! LOL

I once had a shag carpet, which was beautiful, but the problem was that it kept shedding wool and every day I could pick up wool from the parquet floor. It was a pity. That was in 1972! Thanks for visiting! Have a nice day!

Perfect! I'm surprised to see things that I remember being classified first as antiques and then coming back into fresh style with accolades galore! Fun carpet. Seriously.

heeh Leslie,
I thought that your "shag"mend tabacco, but its somthing else interesting to read, How are you doing? Wishing you the very best:)
Greetings from JoAnn/Holland

Ah the good old 70's, colour and shag! The memories are flooding in!
I knew that shag rugs were back, cos on my visit to the newly opened Ikea here in Dublin, they had some. Not in orange or purple though!
I do like the feel of those long, soft strands .

Oh Leslie - I love it! The house I grew up in had every colour of shag. My parents' room had red, I had purple, the spare room orange, the basement bedrooms were green, yellow and a nasty blend of a few colors. Crazy! I always liked my purple carpet though. Now I have boring brown everywhere. Until the kids stop spilling, that's what it will stay. :)

Shag carpets, which i had in the day, were a pain to keep clean. there's some sordid remark about shagging and shag which I'm really trying to avoid...

I remember the shag pile carpet fashion! No-one has it here now, and partly that's because of allergies. It holds the dust so, you see. My dog Sid would love it though!

Ah, yes! «Louis» is pleased to see you made the distinction between the Canadian/American use of the term in contrast to the British use! ;-)

That is a lovely rug....gosh I remember shag carpet..but it never looked as nice as that....gold, or orange, red...oh just yuck....I also remember those vans...I remember my sister and her husband getting a "boogie" van and having is all decked out with the quilted tuffed interior padding and yes...shag carpet....oh my goodness.....to funny

me and my wife have been researching 2012 for about 2 years now and have allready started planning they say by 2010 you will see it in the sky and i think thats about the time we will have everything ready we are looking to start a survival group or if anyone else has one that we can join let me know ill check back later thanks
[url=http://2012earth.net
]2012 end of world
[/url] - some truth about 2012

It is my first post here, so I would like to say hallo to all of you! It is uncommonly comfort to join your community!

These shag carpets really looked so cute and they have very simple and yet classic designs to choose from. Shag carpets existed during the 70's because my mother already has it in our home that time. And to keep and maintain the cleanliness of shag carpets, it must be regularly cleaned. My mother and my wife would bring their carpets to Sugar Land carpet cleaning shops near our place because these shops offer a variety of cleaning services that their clients love so much.