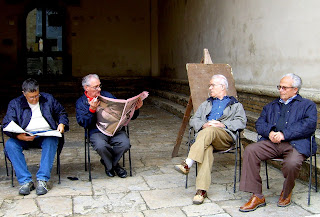 When I was in Italy, England, and Wales last fall I thoroughly enjoyed using my new digital camera. Some of my photos indicated I have an "eye" for photography and as a result, I've entered several of these shots in the Telus Photo Contests. The first time I entered, one of them actually tied for 8th place! If you'd like to actually vote for any of these photos, you need to be a member (free). Check out http://photos.globetrotter.net/index.asp. There are some fabulous photos to see there and you can also check out the archives for previous themes. The theme right now is "Golden Age" and I've so far entered 5 photos. Above is "Retirement, Italian Style". Below are: "Old Villa - Ravello, Italy." "Colosseum, Rome" (In the midst of the modern-day bustle in the city of Rome stands the most well-known symbol of the Golden Age of the Roman Empire - the Colosseum. The soot blackened walls strike an absurd contrast to the clean and bright modern buildings that surround it.) Next is "Ancient Greek Temple, Sicily." Finally, there is "Dormant au Soleil" (sleeping in the sun). Click on the photos to see them more clearly. I'd love some feedback. Which is/are your favourite(s)? 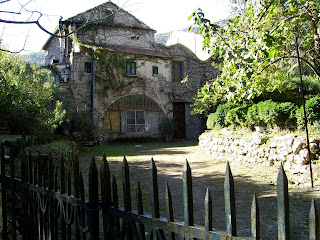 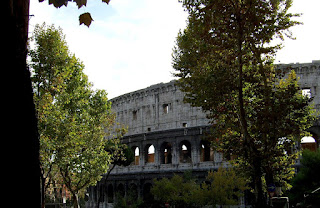 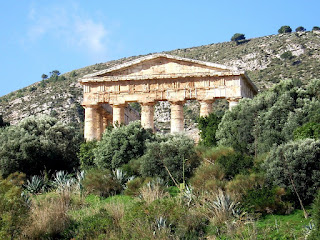 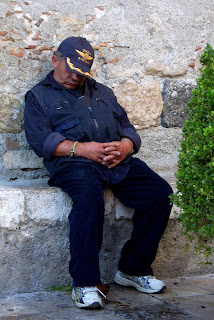 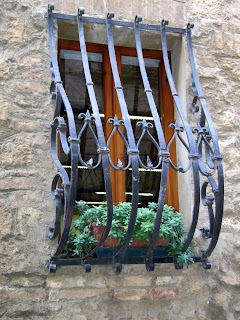 The Italians have the most interesting doors and windows. This was one of the most beautiful windows I saw. Even in October and November, flowers were blooming. 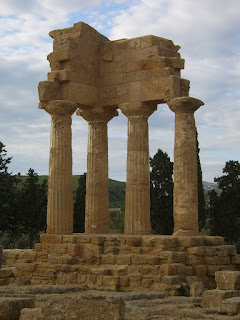 This famous ruin was at the Valley of the Temples in Agrigento, Sicily. 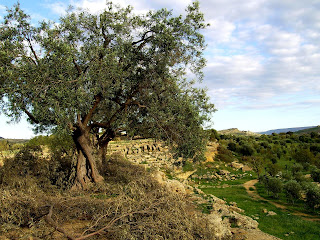 As I wandered around the valley, I couldn't help but see the beauty of the area. Although the ruins were spectacular, the scenery was even more so. 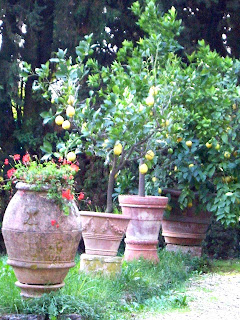 While we visited a tiny little village in Tuscany, I went off on my own to explore. I saw a gate that was ajar, so poked my nose in. This is what was in someone's backyard! This is a typical scene of a fruit and vegetable store in Italy. 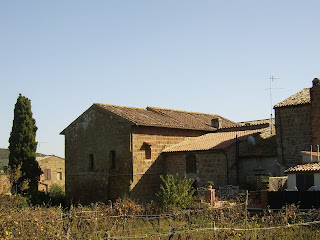 I know for a fact that no one else got this shot. I arrived back at the cars before anyone else and was gazing around when I looked behind me. I climbed up on the cement ledge of the parking lot fence and took this shot of a house in Sovana, a tiny village in the Umbria area. 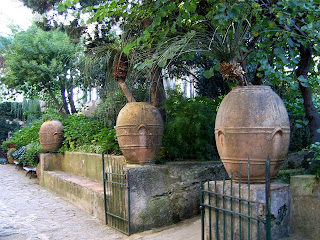 I captured this shot at the Villa Rufolo - just trying to be "artsy." 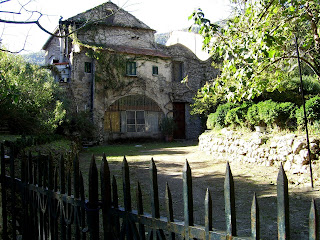 This is at a villa in Ravelo, a small village high in the hills above Positano along the Amalfi Coast. 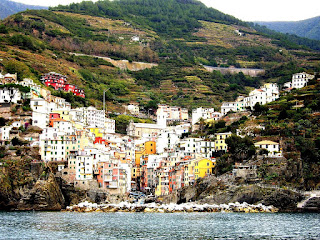 This is the town of Riomaggiore along the Cinque Terre region in north-west Italy. There are 5 towns that comprise the Cinque Terre and they are all built on the side of the cliffs. This is a shot of the town as we approached by boat. 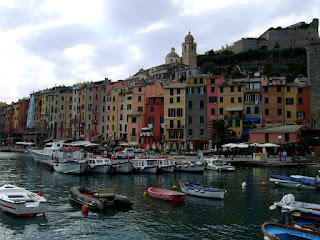 This is the town of Portovenere across the water from Lerici where we stayed. The view from the top of the hill just outside the church was brilliant. 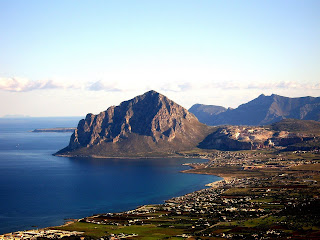 We arrived in Sicily and drove to this ancient hilltop village, Erice, and I took this shot looking back down the mountain toward the sea. 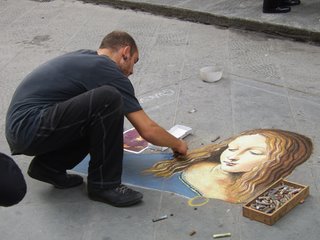 I can't believe it! I just checked the Telus Photo Contest and my photograph of a street artist in Florence tied for 8th place! I'd never entered a contest like this before so I entered two photographs. I really thought my other entry was a better picture, but it did not receive one vote. The next photos I entered were of the fountains in Lerici and sunset over the Isle of Capri. Your thoughts on these would be appreciated. (The theme was "Water.") People are now voting on the "water" photos. If you'd like to vote, you must register at http://photos.globetrotter.net/inscription_1.asp?lang=en 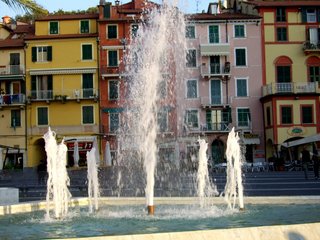 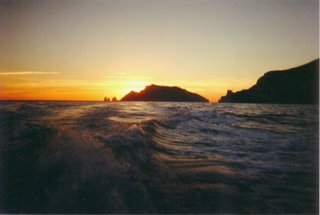 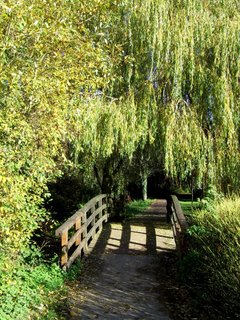 Right now, the theme is "Bridges," so I entered this one just today. I took it one sunny autumn day when friends took me on my first geocaching hunt. I remember thinking "What a beautiful scene. I must take a quick shot." Maybe I'll go wandering and take more photos since I feel like a winner right now. I've always wanted to get into photography and maybe - just maybe - I have an eye for it. (I have been told that I do.)
Posted by Leslie: at Monday, January 08, 2007 11 comments: 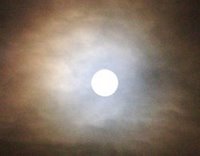 I took Robbie for another walk this evening (yes, 2 walks today!) and it was so lovely out. Just a bit of a breeze creating a crisp fresh smell to the air. The full moon shone down on us as we strolled the neighbourhood streets that are still lit up by the holiday merriment of Christmas and New Year's. By this time next week, all those lights will probably be taken down and stored away for another year. As I gazed up at the moon, beautiful beyond description, surrounded by silver wisps of cloud and a golden circular haze, I thought of all the wonderful friends I've made in the last 18 months or so. There's Suzanne in Arizona with whom I spent 4 glorious days last February. She took me to one of the world's greatest natural wonders, the Grand Canyon. We met online. Josie lives right here in Vancouver, a mere half-hour drive away, and we also met online. We spent New Year's eve together with some of my "old" friends, and we toasted our new friendship and the fun we're going to have in the future. Then there's Jane in Wales (also met online), and we finally met in person this past November when I stayed with her a couple of days. Tonight's full moon had me humming that song:

There have been others along the way, too. God has been good to me with all the new friends I've made - Vicki, Peggy, Joanne, and Connie in Florida; Willy in Paso Robles; Linda in Santa Cruz; Nancy in Porland; Cheryl in Montreal; Neva and Barb in Hawaii; Angie and Linda in New Orleans; Suzanne in Cape Cod; Markee in Denver; Fonda in Toronto; Diana in Akron; and Ada in Baltimore. My mind is just so full of gratitude right now for so many new friends. There was a time in my life when I felt alone but now I'm feeling blessed. I really believe that we're all under the same big sky and love will see us through - together!
Posted by Leslie: at Wednesday, January 03, 2007 13 comments: