X is for eXtra Difficult Days

I couldn't decide which X word to use this week, so I decided to just update everyone on news of some things we've been going through lately that have been extra difficult.

A week ago Monday, Lorne had his second chemotherapy treatment, which is bad enough. But by 7:00 pm he was shivering and shaking so badly I took his temperature - turned out it was around 104F. I dialed 811 (the Nurses' Hotline) to ask if I should take him to emergency and the answer was definitely YES! So off we went, where he stayed overnight. He was put in isolation immediately and tests showed that he had an infection somewhere in his body. IVs were started - saline plus antibiotics. Around 3:00 am, his fever was still at 104F so they had to put him in an ice bath. He told me it was like torture! That helped and between that and another bag of IV antibiotics his temperature finally came down to normal. It took a day or so more for him to feel better, especially since the oral antibiotics he had to take (2 different kinds) made him sick to his stomache.
Something else that was Xtra difficult was that my friend had breast cancer surgery on Tuesday. Luckily, it was only a lumpectomy - so far. Now we're waiting for the biopsies to come back to see if she'll need more surgery. However, she's already been told she'll need chemo plus radiation. I went over to stay with her on Wednesday and today I drove her to pay her property taxes (I had to pay mine, too) and then we went to the school (my former one) for her to check out her office. We went out for lunch before I dropped her off, looking a bit paler than she had been when I'd picked her up. I hope she'll have a good rest this afternoon.
Back to Lorne's treatment...this morning he had to have a blood transfusion because his red blood cells are very low. So that was Xtra difficult for him to go through. I hope it helps with his fatigue as he gets depressed that he can't do much. Then he's seeing his GP to try to get into a program where he can deal with some issues of depression and anXiety.

Thursday, July 1, is Canada Day here and we're going to a neighbourhood street party. We'll wheel over our barbecue, lug over a couple of tables and some chairs and have a rip-roaring Xtra special time.

W is for WHY

V is for VACATION

...and boy do I need a vacation! This past year has flown by due to many things that I won't get into here. And because Lorne has to pursue health issues, we won't be able to take a vacation anywhere. So I will just reVel in some of my past memorable vacations and spend this summer living vicariously through them. 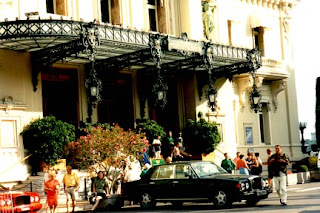 My first trip to England and France was awesome! I had sworn that I would get to France before I turned 50 and I made it! After spending a week in England, my friend Cathy and I took the ferry across to Calais - a very quick trip - and when we arrived I felt like kissing the ground! Many memories come flooding back to me - wine tasting, dining al fresco in Lyon, Monaco and its great casino, climbing the Pyrenees to cross the border into Spain, dipping my toes in the Atlantic Ocean in Biarritz, visiting chateaux in the Loire River Valley, visiting Monet's home in Giverny, Normandy and the World War II museum, and of course Paris and all it has to offer. Just for fun, instead of posting a typical "touristy" photo of the Eifel Tower, see if you can find me in the above photo taken just outside the casino in Monte Carlo.
I took my older daughter on a tour of England and Scotland one year. We also touched into Wales where we had Welsh ice cream and petted sheep along a hillside on our way back into England. Poor Jamie got sick in Glasgow and I had to leave her at the hotel somewhere between Aberdeen and Edinburgh while the rest of us took a day trip to the Isle of Skye. I remember buying a scarf in the "Leslie" tartan and a lovely wool throw blanket in one of my family's tartan. We had a great time in London, too, hopping on and off the double-decker bus. Below left is me at St. Andrew's, Scotland on the beach where "Chariots of Fire" was filmed. On the right is Jamie at Warwick Castle in England watching this jester play the two flutes through his nose! 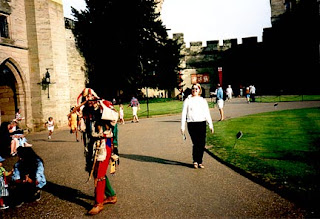 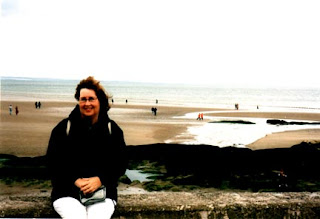 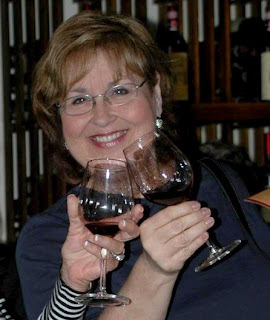 Then there was Italy in 2006, which you can read about in my archives on this blog. That was a trip of a lifetime, spending a month there and getting to see out-of-the-way places where most tourists don't get to go. We ate, we drank vino, we ate, we touristed, we ate, we drank...did I say we drank lots of vino? There were spectacular views of the Mediterranean from Lerici in the north-west, from the Amalfi Coast south of Rome, and from Taormino in Sicily. The photo shows one of my favourite things to do while in Italy!
The last place I want to mention here is the Grand Canyon. My friend Suzanne, who lives just outside of Phoenix, took me there in February of 2006. We drove through Sedona and stayed overnight in Flagstaff. The canyon was the most stunning vista I have ever seen! You just cannot imagine it unless you've seen it with your own eyes. I only wish I were young and agile enough to travel by mule all the way down to the Colorado River!
So, as I "stay-cation" this summer, I will get out all my photo albums and relive my past travels and dream about where I'll go next year. Happy Vacation to all of you who have plans.
Posted by Leslie: at Monday, June 14, 2010 28 comments:

U is for UBER

"Uber" is German for the word "above," but more commonly it's used on the internet for being the best, the top, the supreme, the highest of highest.
Yesterday, we had "uber" treatment at the hospital. It was a very long day, beginning at 7:45 am when we reported to the Cancer Clinic for Lorne to have his PICC line inserted. Neither of us knew much about a PICC line, so we were both very nervous about the whole procedure. However, the nurse, a specialist in this procedure, put us both at ease by explaining exactly what she was going to do, how, and why. She was right when she said the worst part was the tournique and the freezing needle. After that, it was a breeze just waiting for the angel-hair-pasta-sized tube to work its way up the large vein to the heart. I nearly came unglued, though, at one point but managed to control myself. Lorne was a trouper through it all and after his x-ray to make sure it was positioned correctly (and then readjusted), we went and had some breakfast.
I cannot honestly say that the food in the hospital cafeteria was uber, but then that's not what needed to be. A little after 10:00 am, we returned to the CC and Lorne was hooked up to his special cocktail(s). We also had visits from the hospital chaplain, a dietician, and a social worker - all of

whom I'd call uber personnel.
I stayed and read my book while Lorne was undergoing his treatment, but when his non-uber lunch arrived, I headed back up to the cafeteria for something to try to undo the pounding headache that had persisted all morning. I came back an hour later when he was almost finished his treatment, waited about another half hour, and guided him out to the car.
I almost came unglued again in the car just from the relief of that first session being over! But when we got home, Lorne said he was going to mow the front lawn! I almost became unduly frightened that the PICC line would come out, but made myself recall what the nurse had said about him going about business as normally as possible. So I forced myself to get busy with other things and let him do his thing.
So far so good with regard to any nausea, pain, or other post-chemo complications. Maybe he'll be one of the lucky ones who tolerates the entire treatment without difficulties. Fingers crossed!
Posted by Leslie: at Tuesday, June 08, 2010 21 comments:

My roses are blooming! Yes!
My favourite one is called Hot Cocoa Rose because it has a sort of brownish tint to it.
And it smells wonderful, too.
A Little Budding Rose
by Emily Bronte 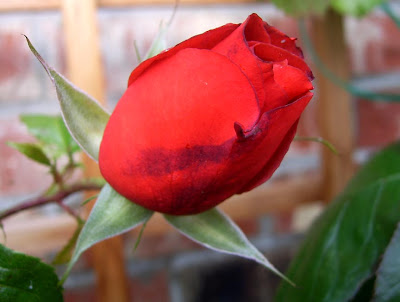 It was a little budding rose,
Round like a fairy globe, 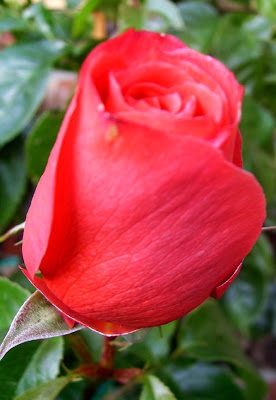 And shyly did its leaves unclose 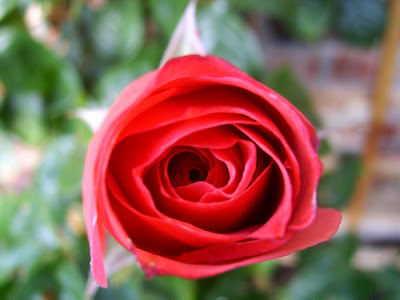 Hid in their mossy robe,
But sweet was the slight and spicy smell 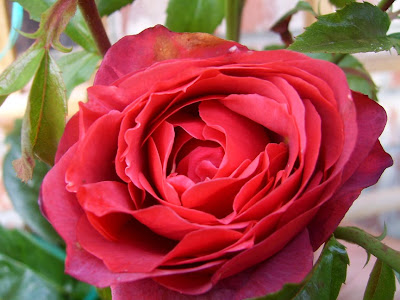 It breathed from its heart invisible.