F is for FATHER

ABC Wednesday - Today is brought to you by the letter F. For more information on ABCW, see Mrs. Nesbitt's blog.

There was no doubt in my mind about what I'd post about today. As soon as I realised it was the letter "F," I knew it meant my Father. My father was a Famous soccer player and is in the BC Sports Hall of Fame as part of the St.Andrews Football Team. They were champions in 1947 and were the team to beat in the fourties and fifties. 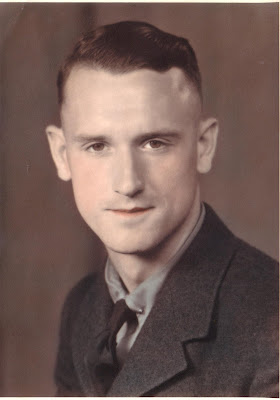 Here's a portrait of the young man around age 20. 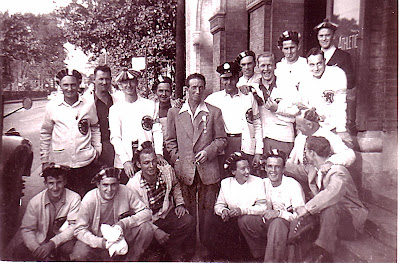 Dad is 2nd from the left rear (no tam) with his team. 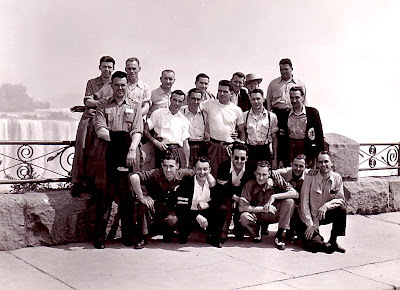 Here is the football team at Niagara Falls, late '40s. Dad is 3rd from the right at the rear.

When the Word War II broke out, Dad joined the Royal Canadian Air Force and became a flight instructor. Thankfully, he didn't have to go overseas, but he did fly the Atlantic Coast patroling for enemy ships and submarines. 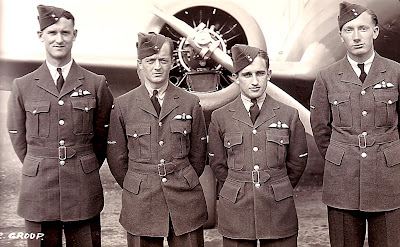 Dad is on the left with others from British Columbia. 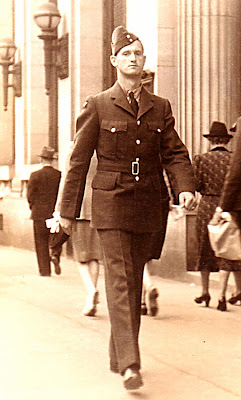 Here he is walking down the street in Vancouver, BC, on furlough, aged 21. 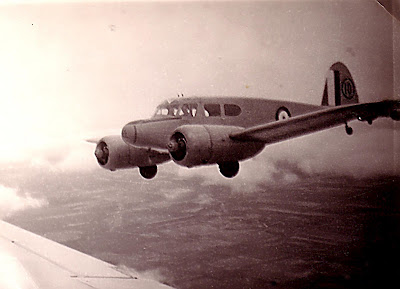 This photo of Dad flying his plane was taken by a buddy in another plane.

After the war, Dad returned to work for the British Columbia Telephone Company where he made a good living and provided well for his family. His wife and three daughters were his number one priority in life, along with continuing to play soccer until he became a linesman and then a referee for many years. He also became Commissioner for the sport for a while, too. My sister was born while he was away in the RCAF, but upon his return told my Mom he wanted them to have another child. Here I am - his favourite! (well, maybe not really but I "was" the only one they planned.) 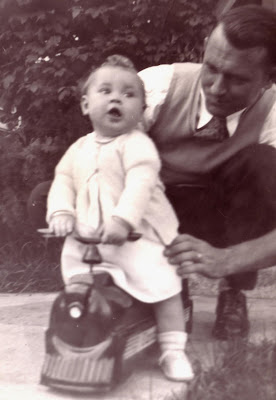 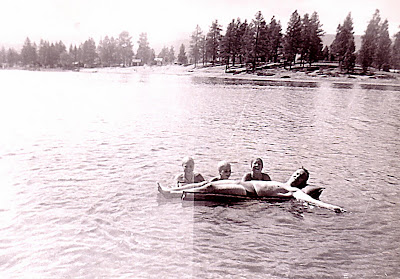 We loved camping every summer and here we are at Wasa Lake in the Kootenay region of BC, an extremely hot spot where all you could do was stay in the water to keep cool. And Dad always made it fun. 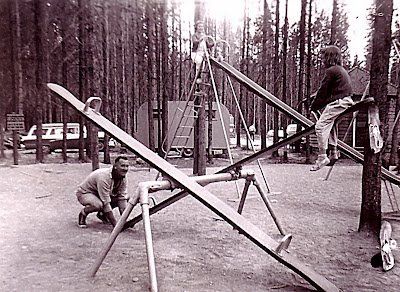 And here I am (on the slide) and my Dad is helping my younger sister on the teeter totter at the campsite in Banff, Alberta.

Of course my father walked me down the aisle on my wedding day, but instead of posting the typical formal photograph, here's one of us at the reception reacting to something funny. You can tell my father had a wonderful sense of humour. 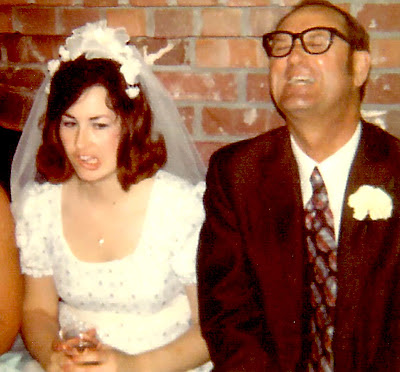 And finally, here is a beautiful floral arrangement given to me by my church family when Dad passed away last September. I was lucky to have him as my father for fifty-nine years. I'll always miss him. 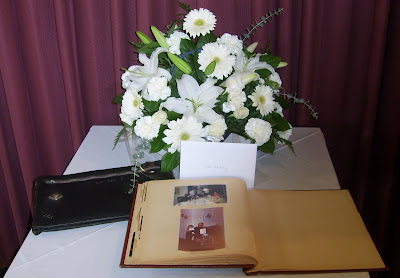 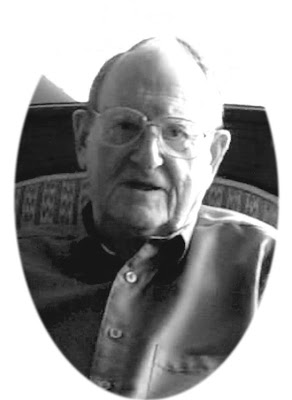 Leslie, what wonderful photographs! Your father was an interesting man, wasn't he?

I can see where you get your height.

That is an adorable photo of you with your father!

Isn't that funny, Josie? I never even saw that photo until recently when my sister dug it out of some papers of my parents. She gave it to me and I have it up on my bulletin board cuz I think it's so funny!

Leslie, that is a wonderful tribute. You are lucky tohave had your father for so long. I lost mine when I was 48, and my mother soon after.

I think we could all fall in love with your dad after reading and seeing what you've written here.

What a wonderful tribute to your father. You where lucky to have had him in your life. I never new my dad.
I love the photo of him walking on the street,he stood tall and proud.

Oh Leslie...what wonderful pictures and tribute to your Father...you did him proud....you know I love all of the photos, even the one of you at your wedding but I think the one I loved was the one of him in his plane and walking the streets of Vancouver...what treasures you have there...I feel honoured that you shared those with us...thank you..

What a wonderful tribute to your Father. He sounds like a great fella. You must really miss him.

Oh wow! What a wonderful post! I've a tear in my eye now!

Wasn't he handsome? Love that shot of him walking alongin his uniform- looks like a shot from a movie!

I agree with what Katney said- this is a lovely tribute.

LIKE HELENA, I TOO HAVE TEARS IN MY EYES HERE.

A lovely, moving tribute.
My Dad was a John too, John Henry, known as Jack.

Splendid the photographs amazing the background of your Father, most excellent `' F `' post.

Another delightful personal blog. Your father sounds as if he was lovely and a great dad. Like the pics too.

wow Leslie,
Very nice photo for ABC
I Like your Fathers photo's he is almost of the same age as mine (1922 died in 2003) only yours lived longer, thats MUCH better right? And Fmily id afcourse the most important in life:)

Leslie,
This is such a wonderful post and tribute to your father. Fabulous!! How very cool that he was a great soccer player (I love soccer) He really was a great countryman. You have a lot to be proud of in Him. Blessings...

What a FANTASTIC tribute to your Father! I can "feel" how special he was to you! What beautiful memories!!!

I never know my father :(( Lucky you, you have such lovely father.

Will you visit mine :D Thanks

I enjoyed your post very much. Your Dad was an interesting man and from the way you describe him a wonderful father. The pictures were great!

What a fantastic tribute to your dad. He had a very interesting life, with everything he achieved. Happy ABC Wednesday!

Leslie that is such a nice tribute. From what you have shared it seems like your dad was a great guy.
My parents divorced when I was very young and my father initially visited often, but then dropped from our lives (me and my sister).
I have gone the other rout and have a great relationship with my kids - and for that matter grandchildrem.
I love to hear stories like yours.

What a great F post and the story too...
This is a wonderful tribute!

Good choice. He's a very handsome man. I loved your wedding photo with him. A beatiful tribute to your father.

this is such a touching and lovely tribute to someone who was clearly a wonderful FATHER .. I am sure you were an equally wonderful daughter!

Leslie, what a special memory of a special man. Yes, the wedding photograph was wonderful!

great tribute to your Dad... wonderful to have so many nice memories...

what a wonderful post! thankyou for visiting my blog :)

Leslie - what a lovely tribute to your dad.

Leslie, your Dad was a very handsome man. The wedding day picture was interesting. I would like to know what you were thinking in that pic. Good Stuff.

Wonderful photograph and tribute to your father. Handsome father you had:) Sorry hi's gone, but you have lovely memories:)

A lovely tribute to your father Leslie.
What a pretty bride you were!

A lovely tribute and a wonderful entry for F. You can almost hera his laugh in the wedding photo.

Nice tribute to your father, Leslie!

This is such a lovely tribute to your Father. There is much love there.
A perfect choice for the letter F.

What a sweet and precious memorial for your father. I love the series of photos and the story. Thank you for sharing.

Your father was obviously a wonderful man, Leslie and this is a touching tribute to him. I just adore that wedding photo! He must have been so very proud of you. Love from Sicily xx

I love the old photographs. They are really wonderful. You are lucky to have them. Thank you for sharing.

What a DAD you grew up with, what wonderful memories. AWESOME POST

A wonderful wonderful post. I wish I had thought of doing one on my father...so sorry for you loss. He sounds like he was a fabulous father.

Some say that the father-daughter bond can be one of the strongest and it certainly would seem so for you and your dad. He looks to be quite the man in every sense. Quite the "catch" as it were. I am so glad for you that you have had him as your father and this was a very lovely tribute to the man.

What a sweet way to honor your dad! Looking forward to that baby announcement!

Yes Fathers are so important , nice memories and it reminded me of my lovely dad who passed away last year.

A wonderful tribute to your father. I bet he was proud of you too.

Wow! These are awesome photos!

Beautiful, beautiful post. How wonderful to have all those photos, and so many memories. I can see your father will live forever in your heart.

What a loving and delightful tribute to a wonderful man, your father. The photographs are superb. This was an excellent post and a perfect choice for the the F theme.

Leslie, my comment will probably be lost among the host of comments, but I just wanted to let you know how much I enjoyed your post and especially the photos. This is my kind of blog.

That was truly a pleasure to read. Thanks for sharing!

A beautiful tribute to your handsome father!

David sent me over.

Hi Leslie,
I could feel the pride and love you feel for your father in every word of this post. You truly put your heart into creating this beautiful remembrance to him.
I enjoyed every word!
xo

Our Fathers shape our lives in so many ways. Shape them and mold them and then fire them in a kiln. All the choices of my life can trace right back to my father. All the discipline in my life (and therefore my childrens) can be traced back to my mother. Your Father seems so self assured striding down the street in uniform...how proud you must be
Sandi

I think anyone with a father will subscribe to that (at least I will - and I hope my four children¨will do the same for me).

Oh, such a lovely and touching post, Leslie! And the photos are excellent.

What happy memories for you!

What a wonderful memorial to your dad. I hope you download this to a disk and save it forever!