Saturday Afternoon on the Dyke

It was a balmy and sunny Saturday today, so after lunch I decided to go to the Boundary Bay Dyke and see what sorts of photos I could get. The sky was a brilliant blue, the breeze was easy, and there weren't too many walkers, dogs, or cyclists around. There weren't any horses, either, although I saw fresh evidence that some had been by earlier.
Here's part of the dyke path as you round the turn and head north towards the mountains, although they are obscured by the clouds. As you can see, there is a line of clouds where the weather changes substantially south of the city of Vancouver. It isn't called "Sunny Delta" for nothing. 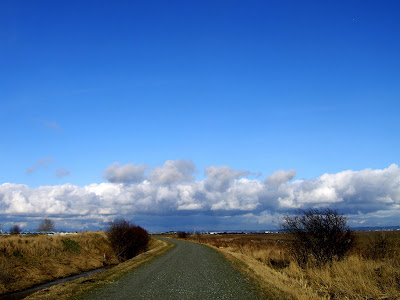 You can see that the tide is way out here. On a clear day, you can see Mount Baker in Washington State. I'll try to get another shot some other day when the mountain isn't shrouded in clouds. 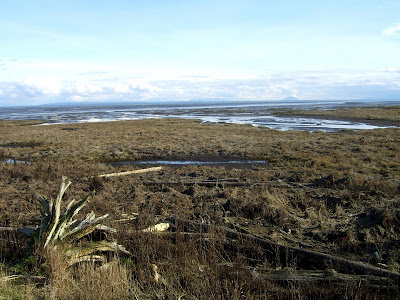 This is looking south towards the area of Tsawwassen and Point Roberts in the United States. The only way Americans can get in and out of this area is by driving through Canada and around to the border crossing at Blaine. Children who live there have to be bussed every day to school. 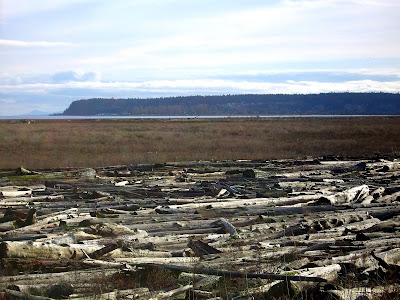 Here I'm looking east towards White Rock, which is an area where there are wonderful beaches and restaurants right on the water. It's a popular attraction in summer, both for tourists and locals alike. 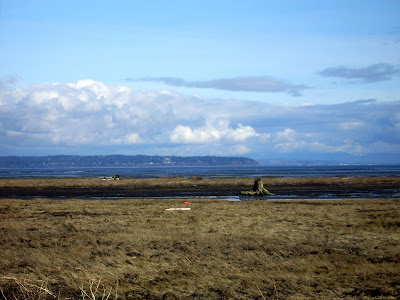 As I ambled along, I came upon a private residence (I know the owners as I taught all three of their children) that has a beautiful setting. It's surrounded by water and lots of lovely landscaped land. Ducks seem to know the place, too, because they're always there floating in the quiet and safe waters. 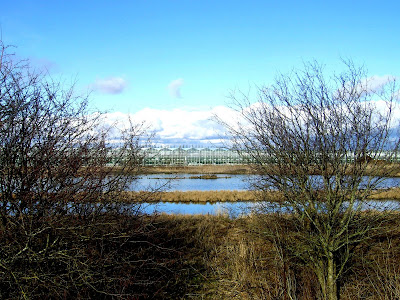 Here's a closeup of what I've dubbed "Duck Island." If you look very carefully, you might be able to see the heron that has joined the ducks for the afternoon. 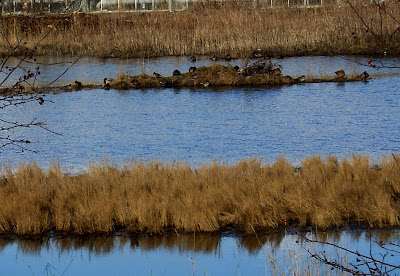 Here the ducks peacefully float around. 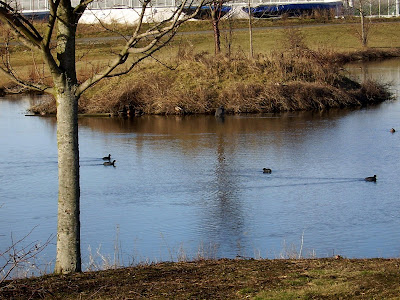 And another shot through the trees. 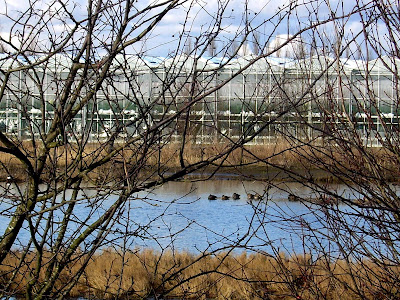 As I turned to head back (west), I noticed the reflections of the trees in the ditch on the side of the pathway. 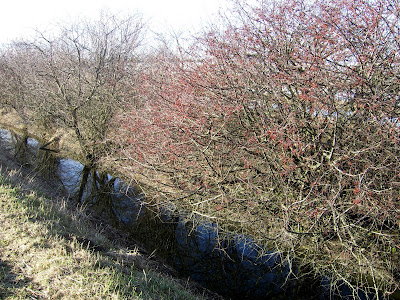 And on my side of the ditch was evidence of moles. I've never seen such huge mole hills before! There were scads of them beside the ditch. 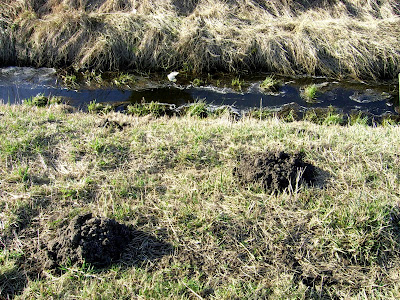 The air was full of birds and I tried to catch them in flight. However, I wasn't quick enough and every time I clicked the shutter, all I got was empty air. There were seagulls, huge black starlings, hawks, and lots of bald headed eagles. On the drive home, there was construction on the road so I had to detour through some farmland. I stopped to take the following photo when I saw flocks of seagulls swarming towards this flooded area. Look closely for the small airplane on the cloud and other seagulls in the air. 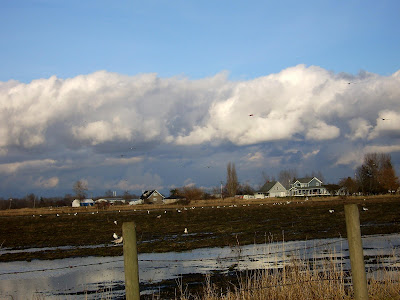 I had to take a shot of this barn, too. I wish I could have gone exploring inside. It looked like it would have been a haven for adventurous kids at one time. 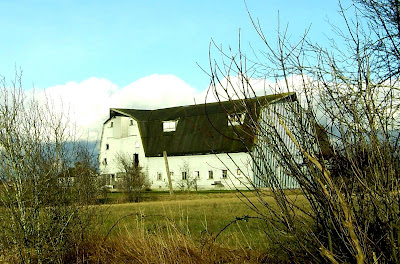 Finally, I just HAD to show you what the sky looked like with the moon hanging in mid-air. I really lucked out in getting this shot. 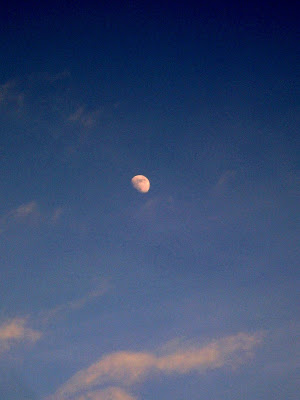 I took lots of other photos, too. However, I will save them for Friday Skywatch and next Saturday's Photo Hunters as the theme is "wooden." I have lots and lots of shots showing all the driftwood that is forced into the bogs of the dyke area due to the tides. Hope you enjoyed these photos of my walk along Boundary Bay Dyke.
Posted by Leslie: at Saturday, February 16, 2008

Hi Leslie,
This looks like a wonderful and peaceful place to walk. Your photos are just gorgeous. You live in a truly beautiful area.
((hugs))

Hi Susie, yes it is a beautiful area. Today, I got in the car and said to myself, "Okay, where to today?" I could have gone north, south, east, or west and had lovely scenery everywhere. But I hadn't been to the dyke for quite a while, so headed off there. But at least where you are, you don't have to wear a wooly jacket. ;D

What a beautiful place. I'm glad you had some nice weather to get out and about. I love the pictures with the reflection in the water.

Thank you for a lovely walk. I tried to photograph the moon yesterday too but your attempt was far more successful!

How on earth do you pronounce that place name, Ts-something or other?! And that private residence - is it really a glass mansion as it appears? I couldn't get the photos to enlarge.

That blue sky is glorious! Thank you for taking us on your walk!

Liz Sorry about that name - the place is named after a First Nations tribe from the area.

I enjoyed them immensely! Love the shot of the moon and the azure-blue of the sky against the road in the first shot. What a beautiful area in which you live!

Hi, I'm not sure if you are aware of this, but a very rude male blogger that goes by the name of BBC has done a HORRIBLE post about people that bother him, and he has used you as an example! He has even pulled a low stunt of linking you to the post, allowing others to joke and make fun at what ever his problem is with you!

It's so disrespectful, that I felt you deserve to know!

You can find it here:

Beautiful Photos by the way! :)

Leslie, This would be a lovely spot I am sure you can almost watch ever bird there ever is! there, They must simply adore it here.

I can understand why you would enjoy looking around and walking around such a beautiful place.

It is almost Grandbaby girl day coming along very soon now! ins't it

Great photos.Great Place. Beautiful weather.You do live in a lovely part of the world. Thanks.

Wow, these are beautiful.

Hi Leslie, Wonderful photos, and very peaceful. I'm sure you had a brilliant walk.

I feel like I had a nice refreshing walk about with you Leslie! Lovely photos. Thanks for sharing.

Hi Leslie: those photos are so especially atmospheric!

Hey haven't you been having an especially cold snap recently? Central Asia including China has the worst winter on record... here in London it was minus five centrigrade which is about 40something fahrenheit aparently it was highly inconvenient I had to leave my "stove" (or cooker as we would say) on all night merely to keep the warm lovely and toasty for my roborovskis (well that was my excuse. They come from the Gobi desert so I'm not sure quite HOW much they DO require the fierce heat of an amping stove but there you go...)

Fabulous! I like the ducks photos and the juxtaposition of birds and plane best. Btw, Leslie, did I tell you I managed to open my e-birthday card that you sent? It did cheer me up and thank you so much. x

Hi.I have to visit you today and not on SWFriday. I will be in Rome, Italy for the weekend. Your moon photo is a very lovely shot. And thanks for telling us about the beautiful area.

On a clear day we can see Mt. Baker from the Sourdough Ridge at Sunrise in Mt. Rainier National Park. We are probably equally distant on either side of it.

I don't know whether it's just me or if everyone else experiencing
problems with your website. It appears as though some of the
written text within your posts are running off the
screen. Can someone else please provide feedback and let me know if this
is happening to them as well? This may be a issue with my internet
browser because I've had this happen previously. Cheers
Here is my website :: www.teenpornsexpussy.com

Greate pieces. Keep writing such kind of information on your site.
Im really impressed by your blog.
Hi there, You have done an excellent job. I will certainly digg it and in my view suggest to
my friends. I am confident they'll be benefited from this web site.
My site - teen sex

Howdy! I could have sworn I've visited your blog before but after looking at some of the posts I realized it's new to me.
Anyhow, I'm definitely happy I came across it and I'll be book-marking it and checking back
regularly!
My homepage Audio Visual

Hello! I just wanted to ask if you ever have any problems with hackers?
My last blog (wordpress) was hacked and I ended up losing several weeks of hard work due to no data
backup. Do you have any methods to protect against hackers?

I do not even know how I ended up here, but I thought this post
was great. I do not know who you are but definitely you're going to a famous blogger if you are not already ;) Cheers!

Feel free to surf to my page :: xxx-fuck.net