H is for Hieroglyphics

ABC Wednesdays is brought to you by Mrs. Nesbitt.

When I was teaching 4th grade, part of the Bible curriculum was about the history of written language dating back to Egyptian times. I learned a lot by teaching it and had a lot of fun with the kids using pictographs and hieroglyphics.

Then when I was in Italy in the fall of 2006, I visited a town named Orvieto, built on top of a mountain made of volcanic rock, on the border between Tuscany and Umbria. It has a fantastic Etruscan history. (see notes below) We visited the necropolis at the base of the mountain and there I found original hieroglyphics scratched into the openings of graves. A fascinating revelation to me, it brought to life what I'd been teaching children for many years. 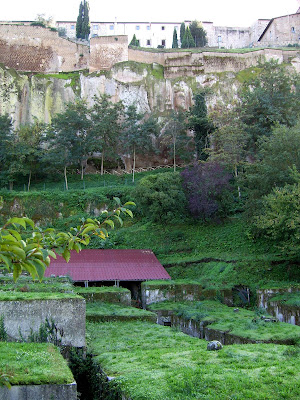 From the necropolis looking up towards the city of Orvieto. 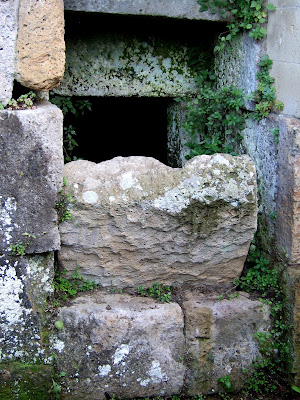 The entrance to a grave. 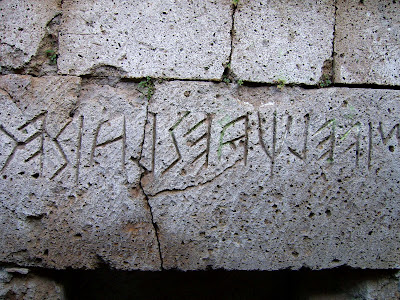 Hieroglyphgics scratched at the entrance to a grave. 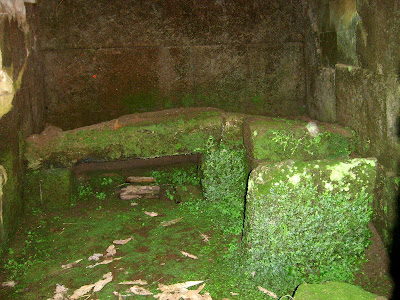 The inside of a grave.

For those who are interested in learning more, feel free to read the following:

The Etruscan alphabet developed from a Western variety of the Greek alphabet brought to Italy by Euboean Greeks. The earliest known inscription dates from the middle of the 6th century BC. Most Etruscan inscriptions are written in horizontal lines from right to left, but some are boustrophedon (running alternately left to right then right to left).

More than 10,000 Etruscan inscriptions have been found on tombstones, vases, statues, mirrors and jewellery. Fragments of an Etruscan book made of linen have also been found. Etruscan texts can be read: i.e. the pronunciation of the letters is known, though scholars are not sure what all the words mean.

No major literary works in Etruscan have survived, however there is evidence for the existence of religious and historical literature and drama. It is also possible that the Etruscans had a notation system for music.

The Etruscan language was spoken by the Etruscans in Etruria (Tuscany and Umbria) until about the 1st century AD, after which it continued to be studied by priests and scholars. The emperor Claudius (10 BC - 54 AD) wrote a history of the Etruscans in 20 volumes, none of which have survived, based on sources still preserved in his day. The language was used in religious ceremonies until the early 5th century.

Fantastic!!! I love the hieroglyphics!!
Have a nice wednesday:)

Hi Leslie, This is very interesting I love to read all about history and you wrote some very intersting facts, I love travelling and you made a good H here Thanks.

Thanks for visiting my ABC of today, Greetings from JoAnn
(Holland)

Hi Leslie, This is very interesting I love to read all about history and you wrote some very intersting facts, I love travelling and you made a good H here Thanks.

Thanks for visiting my ABC of today, Greetings from JoAnn
(Holland)

That is so cool. When my daughter was at Wheaton College she was an ancient languages major. She came back to Washington to finish school and couldn't find a school with a major close to that. She was really looking forward to hieroglyphics...
have a happy week...

This was an interesting post, thanks for sharing. I've always thought hieroglyphics were interesting.

Leslie, these are great shots and what a great idea for H!

How intriguing this post is--I'm glad you decided to use it for ABC Wednesday.

Very interesting post Leslie. Besides Orvieto is one of my favourite places in Italy. The cathedral is wonderful among so many other things.

Original and instructive post.
We may find the best on the net !

Gosh, the photos that went along with this incredible post are amazing. I was glued to my screen the whole time. I didn't know learning about hieroglyphics could be so fascinating!
Thanks Leslie.

How interesting and what a fascinating photo of the heiroglyphics.

Fantastic post:D So interesting and the pictures beautiful.

Interesting that we know so much about the Etruscans. I wonder if we'll ever discover how to understand their written language, though. Archeology HAS to be one of the "funnest" occupations!

That is a really interesting history lesson. You should write a book.

I barely remember Orvieto. I think it has been too long since I was in Italy and I should go back. (It has ben 43 years.)

Very interesting "H" post. Thank you for the information.

I have always wondered how they figured out how to read hieroglyphics....seems impossible! How fun you got to see what you had been teaching...fun!

What an excellent H theme Leslie. This was a most informative post.
I have always been intrigued by hieroglyphics and have a simple translator program on the computer which I have used off and on. The photos were wonderful.

Great h:photos. What lovely green colours! Thanks for the history lesson.

Thanks for visiting my blog and your kind comments.

Your head is just full of information and I appreciate that you share it with us. I love the pictures and what a blessing to have such facinating trips in your memory bank!

Wonderful photos Leslie and the information was so helpful. I would love to travel and see these writings for myself.

Great choice. I'm jealous. I would love to visit places such as that. Thanks for the added history lesson. :)

Hieroglyphics, Etruscan history and Italy in pictures! How interesting. . .a delightful post. Thanks for sharing.

Fantastic, seeing real hieroglyphics! And in Italy too!

Very intriguing photos with a history lesson to boot. Thanks for visiting my blog as well.

Wow, Haven't heard of hieroglyphics before, thanks for sharing.:)

Yes, fascinating and I can imagine how the visit to Orvieto made what you had been teaching a "living" thing for you. Wonderful photos, as always.

These are certainly some of the best pictures I have seen yet!

I'll have a look if I ever get to Italy. (But I always thought that the term "Hieroglyphics" was reserved for the original Egyptian varieties, or am I a purist?)