When I saw what the theme for today was, I was a bit perplexed. Different.
Merriam Webster defines the word as partly or totally unlike in nature, form, or quality. So does that mean it has to be something that "everyone" would find different? Does it mean something that only I would find different?
So with this feeling of uncertainty regarding the facts and lacking confidence in myself, I decided to go with a few photos of things that are different to me. Being born and brought up in what is considered a fairly new. or young, country (after all, we're only celebrating our 150th anniversary on July 1) caused me to look in wonder at things like milestone markers from the 19th century, light boats (boats that actually carry lighthouses on board to warn boaters of the coastline or other dangers lurking in the waters), tree trunks thousands of years old that have been carved into weird looking creatures, (all these in Wales) and queer yet quaint mimes enticing tourists into the Uffizzi Museum in Florence, Italy.
Perhaps to those who live in ancient lands won't find these things out of the ordinary. I am wondering, though, who does find these things different. 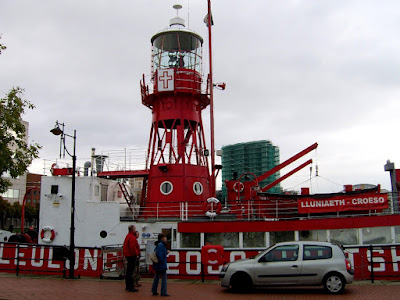 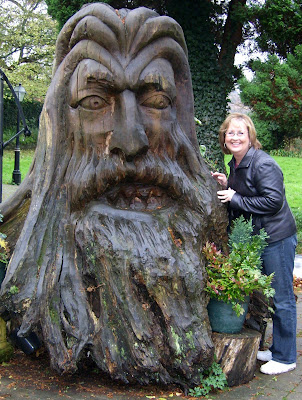 Carved tree trunk at the Priory, Newport Wales (I call it "Dentally Challenged") 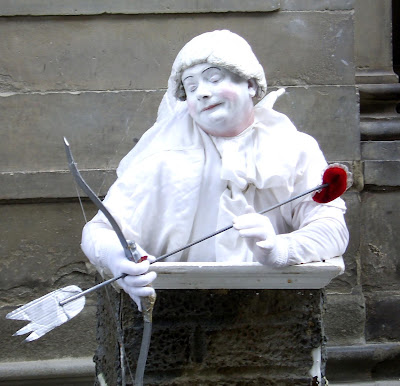 We don't see anything like this outside any of our museums. This fellow was outside the Uffizzi Museum in Florence, Italy, and tourists would go up to get a kiss and have their photograph taken. No cost.

Different to me too Leslie. These were great photos for the theme!

I enjoyed your take on this theme. The dentally challenged tree trunk carving is hilarious. I hope you have a great weekend.

Oh I think you've got something here. These are all definately different than what we see in our young countries. I want to go back to Wales, etc. etc. Wonderful choices Leslie...

I love your photos and your history, some carving

Things have changed at the Uffizi since I was there. I guess that makes it different. (This guy probably wasn't born yet when I was there, though.)

these are all new and different to me as well Leslie...great photos for the theme...and I do like the carved tree...

Lovely photographs. Mile markers really are classics. I doubt that they are being replaced.

I love that wooden carving

That carved tree trunk is hard work. I mean the time and effort given to it. And it's funny.

That carved tree is definitely different!

These are great shots for this week's theme Leslie. I love the carved tree especially.

The ceramic images have been at West Van for several years. These photos were taken last year and there are even more than I have shown here. Nearer to 14 than 25th I would say.

I love the tree and the cupid! Amazing photos and great take on the theme. Happy weekend and Happy Women's Day!

Love the different way you think!

The last picture is really interesting, more interesting is that people go up to kiss it :)

What a nice take on the theme. THe tree carving is pretty fearsome and might make a light snack of teh fellow outside the Uffizzi! HAppy weekend

These are all very different to me too!! Have a great weekend! I enjoyed your post!

The style of the carved tree trunk is really mighty !
I don't remember the statue outside of Uffizi...Is it new ?
miss Yves

LOL - what a lot of super fun photos!
Great choices!
Have a great weekend
L

I have been to Italy but not Florence. I like the tree stump which is very different from its kind because it looks like a man.

I have put my comment on the previous Theme - sorry. Come of insufficient sleep.

Very different and I know that it would be something to really see in person.

lovely different shots! The last one is so adorable

Great pics for this weeks theme! I agree, I think they're all different!

miss yves the "statue" in front of the Uffizzi is actually a real man - a mime. He only "came to life" if you went up for a kiss and a photo.

Did you go on board the lightship? It's a Christian ship and cafe.

Love the tree trunk carving too.

Liz Yes I did go on the ship and toured around. It was amazing! Those are my friends Marion and John sort of behind the tall guy who's an old school chum of Marion's. Mike lives just outside of Cardiff and is a good buddy to M's bro Ken.

That is an incredible tree trunk!! My goodness!! Straight out of the Wizard of Oz!!

I enjoyed these photos!!

Those all fit the bill if you ask me. Great photos! Happy hunting!

Yes, it's different than what I see around me, in Texas!

Congratulations on the birth of that lovely grandbaby! and your grandson is so sweet too.

What a surprise to see some pics of my hometown here! You have cheered me up, Leslie. I love your take on the theme anyway!

Those are great photos. Thanks for sharing!

Those all look different to me!

Very cool shots. Thanks for visiting and have a great week!

I liked all your choices for "different".