Wish I Could Afford an Original Monet 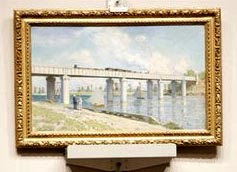 Ever since I visited France and Monet's home in Giverny, I have had a thing for his paintings. I bought two prints while there and had them professionally framed upon my arrival home. I've shared these pieces of art with students over the years, along with photos of me standing on the bridge at Giverny overlooking the lily pond. Can you see me? These are the two prints I bought in Giverny for the approximate equivalent of $15.00 Cdn. in 1997. The framing was tres cher. 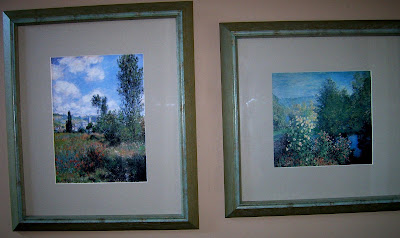 When I taught Art to my fourth graders, I did a whole unit on Monet - his life and work. We studied pictures of his paintings, the meaning of Impressionism, watched a couple of videos about his life and works, and experimented with some of his techniques. It was so much fun. I got a lot of ideas from this book for my Art classes. 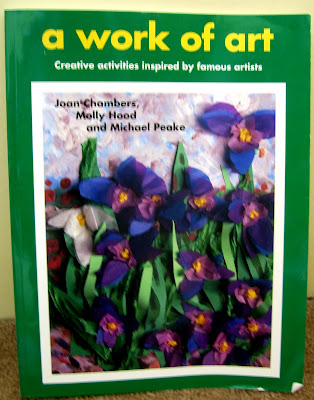 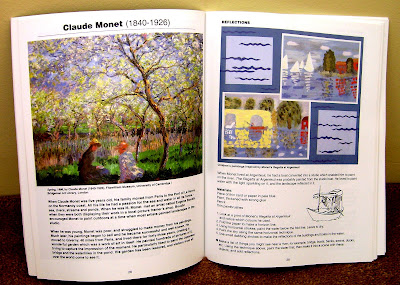 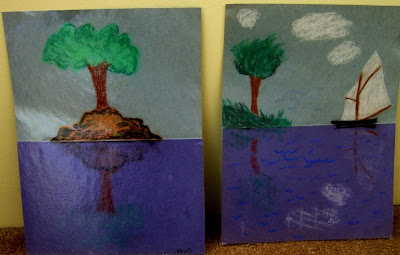 Since I'm not even close to being an artiste, I have developed a taste and appreciation for art, especially the masters of impressionism. Next time I'm in Paris, I'm going to go to the Louvre and the Musee d'Orsay. I must say, though, that when I was in San Francisco the last time, I did see one of Monet's famous water lilies painting. It was over 40 feet long! Very impressive, to say the least.
I will never be able to afford an original Monet, but I can appreciate his works by visiting art museums in Europe and America. That, at least, I think I can afford.
Posted by Leslie: at Wednesday, May 07, 2008

I've always wanted to paint. Alas, it is the same as playing the piano, I wanted to and took 6 years of lessons before the teacher told my mama she was wasting her money. I think my main talent could possibly be nagging....:) I can't imagine 41 million dollars!

So beautiful. I took my daughter on a bike tour to Giverny, and I think it was one of the highlights of our trip. So very beautiful. Makes me think I can paint...

Nancy - you're like me I think. I've always wanted to play the piano, but I'm just not musical.

David - lol trust you to pick up on that! You and your puns!

MPM - Isn't Giverny the most beautiful place? And it was raining the day we were there! I can hardly wait to go back there on a sunny day.

I can draw . . . a little . . . a tiny little. But I love the camera. Photography is art and I only have to recognize an artful moment. The camera does the rest. Well, actually. There's a lot more to it than that! And without me the camera would be NOTHING! :>)

I love Monet, and in fact all of the impressionists. They were very avant-garde in their time, and now we can see how lovely their paintings are. I have been to the Louvre and seen original Monets as well, but I think after seeing van Gogh paintings in person, he is now my favorite. The vibrancy of his paintings is astonishing.

Ruth - I'm getting to enjoy my camera more and more but lots to learn. Maybe I'll try abstract painting since I really can't "draw." My daughter says she'll get me started.

Josie - I'd love to go to the Louvre, but when we were there, there just wasn't enough time. I will definitely go back to Paris one day and luxuriate in the surroundings. Maybe you'll come, too?

I know this very intresting book , I gave it to my daughter, when she was a child .
It's rather difficult now to visit Monet's Garden ...
I love your "avatar"/"Imago"(?) in the field of tulips !
One of my hobbies is painting (watercolours )
Miss Yves

Linnea's story is wonderful. We also got the one about planting a window garden.
I remember my little son coming home from school, talking about water lilies he wanted to plant. It soon dawned on me that he was talking about Monet.

I taught my K kids about artists and we tried several styles throughout the year of the different ones. Lucky you to get to travel to see them.

I've never seen that Monet before. It's not typical of him, is it? Says she sounding like she knows anything which she doesn't!

Oh, you might, one day, Leslie - afford a Monet, I mean. Don't give up hope yet -I haven't! I've never been to Giverny but have always wanted to.